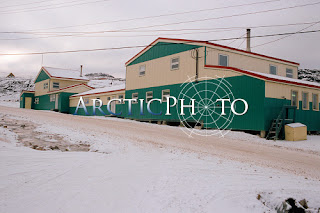 On Friday, in the middle of her presentation, Heather asked, Why aren't more Inuit artists accessing funding for indigenous artists? To answer this question she recalled her findings from 2011, when she learned that of the 60 Inuit artists she had spoken to, only 2 had applied for arts funding. When those who had not applied were asked why, a common response was, "I didn't want to take money away from those who really needed it," while others saw the funding as "charity." From there Heather's presentation turned to a lack of Inuit in administrative positions, a problem compounded by the lack of a university in the north where those who might hold such positions would be prepared for them.

Something that was not mentioned in Heather's presentation -- a presentation that began with a ("six minute") presentation she was invited to make on northern economic development and the importance of the arts -- was the role co-ops have (and haven't) played in a northern arts infrastructure. For my part, I was interested not so much in the past legacy of these co-ops (a largely commercial venture based on a somewhat feudal system), but in how they might be involved today in the making of a more complete northern administrative infrastructure that would serve both private and public interests alike. But then, after asking this question, it occurred to me that maybe these co-ops will never converge with other forms of arts production, that like David's "colonial museums" they will continue to play to the dead and not to the living, giving people what they know, not what they don't, about what it is to be this north.
Posted by Michael Turner at 9:20 AM