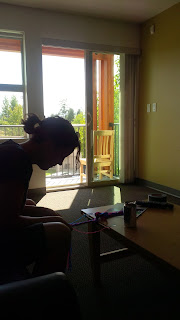 Today was the final panel of the residency. Julie, Tara, Annie, Millie, Jessie (Short), Cheryl, Warren. It was billed as informal, and it was. Jessie brought her weaving on stage with her.

Before that we were treated to staged works by students of Troy's Indigenous Performance Praxis course. These works -- presented by four groups of four to five performers -- varied from those based on historical material (the 1990 Gustafson Lake Standoff) to those embodied by movement.

Tonight is a group dinner at Platypus House, hosted by Haruko, whose performance yesterday had the outline of her body filled in with that which she had collected since her arrival in early July. Following tonight's dinner, a performance by the youngest member of the residency, Jessie Fosty. 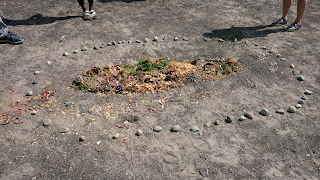 Posted by Michael Turner at 4:23 PM