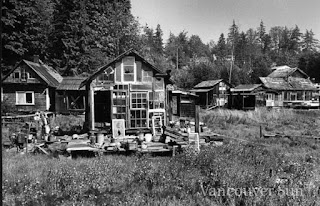 Mudflats Living (1972) is the name of an NFB documentary about a community that took root at the Mapplewood Mudflats in the late 1960s.

A second, more lyrical documentary was made by Sean Malone, entitled Livin' in the Mud (1972). In Malone's doc (currently unavailable online), activist Helen Simpson confronts a demolition crew, and later, the District of North Vancouver burns down the last of the mudflat homes.

The proposed "town site" to which the DoNV mayor refers was never built. If it was, it was built as a shopping mall on the west side of the Ironworkers Memorial Second Narrows Bridge. Not the same thing -- only an economic rationale by a DoNV city council that did everything it could to move those "squatters" along.
Posted by Michael Turner at 11:15 AM