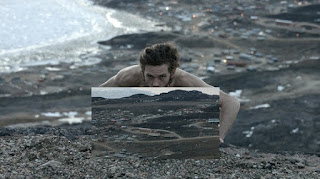 The picture above is of the artist Arvo Leo, who was still a Belvedere resident as of July of this year when it was announced that he would be a resident at the Rijksakademie vanbleeldende kunsten in 2017.

Early in Arvo's one hour video Fish Plane, Heart Clock (2014) the artist is seen climbing a hill in Cape Dorset, Nunavut while carrying before him a picture of the town below -- a picture taken from what looks like the same position as the camera that has captured him.

Is the artist a camouflaged hunter, or is he presenting himself clad in an artistic device (a trompe l'oeil) in order to make his intentions known: that he is not a cultural tourist, as some suggested after an earlier work he had made in India and installed at the Western Front, but an artist (who happens to be white) visiting an artist's town (that happens to be Inuit)?

Below is Warhol's Self Portrait with Camouflage (1986). 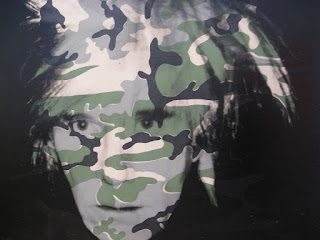 Posted by Michael Turner at 8:32 AM