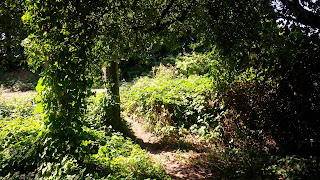 Years ago one winter we walked the CP Rail lines from 2nd and Fir to 49th and Arbutus. It took a while. There are community gardens along the way, but nothing as elaborate as those that run south of 49th to the north arm of the Fraser River, past 70th, where residents have erected schrebergartens.

We said we would resume our walk one day, and until yesterday we left it at that. In the meantime, CP and the City got shirty with each other over the future of what is commonly known as the Arbutus Corridor -- despite the fact that CP was given thousands of forested acres in the 1860s for making Vancouver, not Port Moody, the terminus of its national railroad. Last year CP calmed down and sold the Arbutus Corridor (back) to the City for less than market value. Just recently it removed most of its railway tracks.

The City says it wants the Arbutus Corridor to be a green space, a commuter bike lane. While I am sure that certain stretches will be given the "green" treatment (including some very un-green asphalt bike lanes), those that run through commercially zoned areas like Kerrisdale might be made to behave similarly. Whether this means public markets with portable kiosks or more permanent structures with market or social housing remains to be seen. 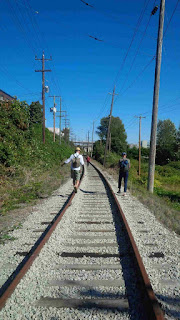 Posted by Michael Turner at 9:44 AM