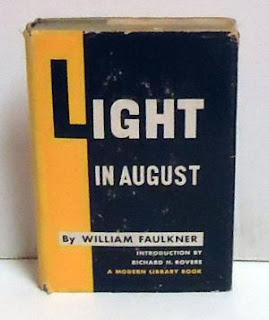 Above is the edition of William Faulkner's Light in August I started reading on a train to Portland years ago and finished years later on a train from Berlin to Kassel.

I came upon the book during a recent purge -- not the copy I read but one I purchased later, to read again.

Below is what I wrote inside the book's back flap, a passage whose page number I forgot to include:

Memory believes before knowing remembers. Believes longer than recollects, longer than knowing even wonders. Knows remembers believes a corridor in a big long garbled cold echoing building of dark red brick sootbleakened by more chimneys than its own, set in a grassless cinderstrewnpacked compound surrounded by smoking factory purlieus and enclosed by ten food steel-and-wire fence like a penitentiary or a zoo, where in random erratic surges, with sparrowlike childtrebling, orphans in identical and uniform blue denim in and out of remembering but in knowing constant in the bleak walls, the bleak windows where in rain soot from the yearly adjacenting chimneys streaked like black tears.
Posted by Michael Turner at 11:19 AM