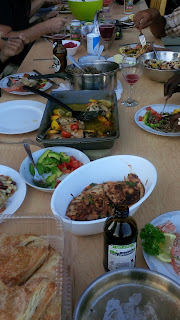 After yesterday's residency meeting Leah suggested a group dinner of Upper Cascaders. That was fine with Aaron, Camille, Charles, Evan, Haruko,  Olivia, Srimoyee, Tara and me, especially since it would still be warm enough to eat outside.

Leah made a chicken dish, Aaron made quesadilla, I cooked a salmon, Tara brought pastries…but it was Haruko who stole the show with her coleslaw, dip and gomae, which she said had plantains in it.

During dinner we talked about what Jackson told us earlier, how he was getting up at 4am to see if he could conjure some earth songs. Haruko had mentioned hearing an owl at that time, and Jackson said he had heard it, too.

I was up at 4am this morning. A fire engine was racing around campus, doing manoeuvres. I looked for Jackson, I looked for that owl, then the fire engine's lights went on and everything looked like a disco inferno.
Posted by Michael Turner at 9:37 AM