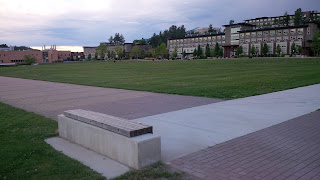 For this week's panel, our hosts asked panelists to devise a question to ask of each other. The question that emerged was: What role do each of us play in a future, in moving things forward?

Charles spoke of his work coming out of a "Jamaican context…where it is not easy to hold binaries," and I wanted to hear more, particularly in light of the binary that has "indigenous" contrasted with "colonist" and its influence on present-day Jamaica, but Charles returned to the panel question when he talked about his work "bouncing between past and present."

Elizabeth (Beth) spoke of her work as a digital game maker (her latest project is called Thunderbird Strike) and the difficulty game makers have in moving forward in a commercial gaming industry that insists upon the maintenance of the winner/loser binary (not that she is interested in that industry). In Elizabeth's game, there are no losers, only targets (mining companies).

Jackson spoke of something I mentioned in a recent post, concerning his 4am earth song excavations, but also of how he "accidentally became a documentary filmmaker" through an interest in indigenous radio stations. He addressed the question of Time (future) as a feature of Western cosmologies, whereas indigenous cosmologies are spatial.

Srimoyee spoke at length of her "genealogy," how she came from a "middle-class, secular, democratic Mumbai/Bombay family" and how her experiences as an international student in Central Canada (working as a janitor in the summers) "informed [her] world-view." She concluded her presentation by stating an "interest in the relationships between indigenous and settler cultures, and becoming fluent in each other's histories."

Like Srimoyee, Michelle works primarily as a curator. For her presentation she spoke of indigenous curation as an opportunity to "change what people know of indigenous people" and the "integral role of indigenous people in the future of the country now known as Canada." Exhibitions, according to Michelle, provide "platforms for conversation," "encourage empathy."
Posted by Michael Turner at 12:50 PM