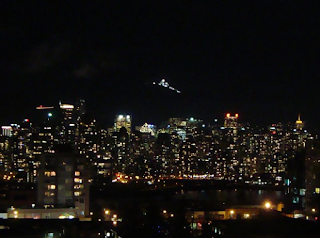 Writing behind night's black veil, knowing that today will be sun-filled, our first glimpse of snow on the North Shore mountains -- Grouse, Seymour, and the one NBC insisted be re-named Cypress Mountain for the 2010 Winter Olympics because Cypress Bowl sounds too much like a toilet, or a stadium where Americans play football. I'm still not over that -- an American media outfit telling us to rename something, and us agreeing to it.

Posted by Michael Turner at 7:19 AM No comments: 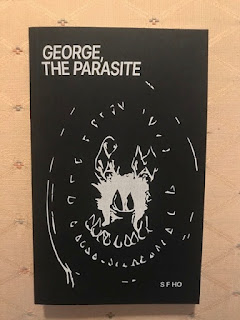 In August JA sent me an email asking for my address so he could send me a copy of S F Ho's George, the Parasite (Montreal: SPEC/FIC, 2020) because he thought of me when he read it. Not what's written, but how. So rare to hear people talk about "how" anymore. Everything is outcome-oriented, writing being the means.

Ho's book begins with means in the form of an "all day" walk, with no mention of a destination. Or maybe I should give you the opening paragraph, so you can read it for yourself:

"Two people go for a walk together and they walk all day. There are so many things to see and these things shift constantly as they [the walkers? these "things"? both?] move through space and time. When they get tired of walking they squat on a curb outside of a gas station. The gas station sells coffee and cups of lukewarm green tea. George orders tea while his companion orders coffee." 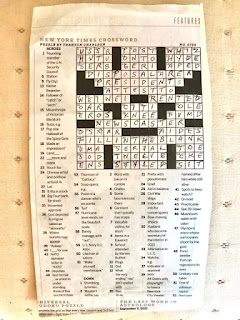 Lovers of the NY Times Crossword know that it begins on Monday and grows more difficult as the week progresses -- until Sunday, when the puzzle is twice as big, yet whose level of difficulty is the same as Thursday's. Recently I've noticed more multiple word answers in the Thursday puzzle, making it closer to Friday and Saturday's puzzles, where two and three word answers are common.

Something else I've noticed is how poorly I fair on clues drawn from popular culture -- from the 1# song of 2006 to secondary characters from recent Netflix series. Answers to these clues are arrived at only through induction, based on what can and cannot happen linguistically between letters supplied by the answers that cross the space provided.

My interest in the puzzle began when I was fifteen, when popular culture was all I knew and my mother, who was addicted to the puzzle, would call out from the den, "Karen of 'Five Easy Pieces'!" or "Soul's Barry, five letters, middle letter 'I"!" and I would shout back "Black" and "White," respectively. Like my mother, I too was addicted to the puzzle until my mid-forties. We have the pandemic to thank for returning us to it.

Posted by Michael Turner at 10:47 AM No comments: 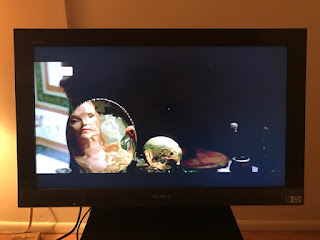 The lumpy mirrors of Ancient Rome, circa 50 BC, from the nicely written, finely-detailed HBO series Rome. The mirror on the left displays the distorted image of Servilia of the Junii, played by the ravishing Lindsay Duncan; the mirror to the right, the cameraperson?

I purchased the first season of Rome at the SPCA Thrift Store on Victoria Drive. A few days later, at AA Furniture & Appliance, Anthony Birley's Life in Roman Britain (1964), which begins with Caesar's invasion of England in 55 BC, two years before his legions crushed Gaul, when Rome in fact begins. 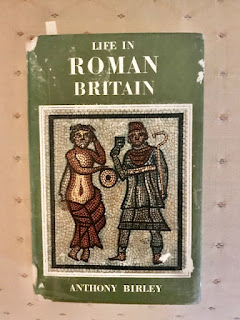 There is a great quote from Tacitus (b. 56 AD) in Birley's book, one reminiscent of the method successful colonizers use when taming those they've invaded:

"In his second winter [Gnaeus Julius] Agricola made a particular point of encouraging the erection of public buildings and the education in the liberal arts of the sons of leading Britons. 'The result,' Tacitus sardonically comments, 'was to create a fashion for porticoes, baths and elegant banquets, which the ignorant provincials called civilization, when it was in fact part of their servitude.'"

Posted by Michael Turner at 10:30 AM No comments: 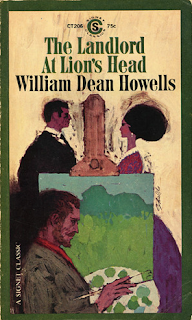 Rolf has an excellent collection of Signet paperbacks he has saved for their gorgeous covers, some of them designed by Milton Glaser, best-known for the 1966 Dylan poster that came tucked inside Bob Dylan's Greatest Hits (1967). Recently, while looking through Rolf's collection, I noticed a title and author I had not heard of before, and then the image, which I misread at first glance.

Without knowing anything of its story, it appears there is something coming between the man and woman who are not the subject of the artist's landscape. What that something is is at first glance what it looks like, and that is a phallus and testes.

Years ago, when the painter's easel was a more common sight than it is today, we would have recognized the easel and thought no more about it (the visible part of the easel is what's referred to as the "front vertical member"). Or if we thought anything, we might have thought about the relationship between the man and the woman facing each other and the artist before them.

A love triangle? Sure. But why is the artist painting a landscape and not the couple? Probably to signify that the couple and the artist, though pictured together, are not literally in the same place at the same time. So rare to see covers back then representing two realities, not one.

Posted by Michael Turner at 8:15 AM No comments:

The Assassination of Margaret Thatcher (2014) 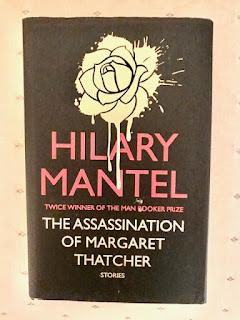 Hilary Mantel is one of those names forever afloat in the writersphere, a writer who participates in more than a couple of literary genres and has pet fascinations with the history of her people, most notably the low-born Thomas Cromwell, King Henry VIII's fixer before Cromwell's own fixing in 1540.

I knew of Mantel's interests before reading her, and I am reading her now -- a 2014 collection of stories I picked up at the East Hastings Value Village, The Assassination of Margaret Thatcher. Yet another instance of the author making something (lethal) of power -- what it does to ye, what ye get for wading into it.

The opening story, "Sorry to Disturb", is set in Saudi Arabia, where the narrator's husband (like Mantel's own? a geologist?) has been sent. Until recently, we would read this story for what transpires between the narrator and the Arabic-speaking "Asian" man who comes to her door for assistance, and from then on makes a succession of return visits (I am reminded of the janitor in Alice Munro's early short story "The Office"), but since 2016 or so many more of us read to see how a white woman writes about a white woman living with her white husband in an autocratic Islamic country.

I have nine pages left in this 36-page story, and so far my marginalia is focused not on Mantel the storyteller but on Mantel the anthropologist. In one instance, while the narrator is sweeping up the street dust that blows against her apartment door, she relates how her "male Saudi neighbour would come down from the first floor on the way out to his car and step over my brushstrokes without looking at me, his head averted." Her explanation? "He was according me invisibility, as a mark of respect to another man's wife."

A couple pages later, when she foreshadows the bad end that comes of her "relationship" with her accidental visitor, she writes: "This is where it began to go wrong -- my feeling that I must bare out the national character he had given me, and that I might not slight him or refuse a friendship, in case he thought it was because he was a Third Country National."

But is the narrator wrong in this respect? Or is she simply an empathetic person who would break from her writing (the narrator is also a writer) to indulge someone who originally called on her out of need? Would it have been "better" for her to remind the caller of the inappropriateness of his visits, given that her husband is always out when he stops by? Or would that have been too scary? Scary for whatever wrath her refusal might incur (more than English condescension) or scary because she would be speaking not as an autonomous human being but as someone else's wife?

Posted by Michael Turner at 9:48 AM No comments:

"Your Family, We Care" 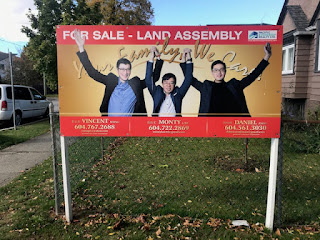 Vincent, Monty and Daniel are agents at Pacific Evergreen Realty, Ltd., the company behind a land assembly designed to attract developers who build within an inch of what's permissible under local bylaws. Whether this build will be market, rental or social housing is to be determined. One thing we do know is that Monty and Daniel have gmail accounts, while Vincent is sticking with yahoo.

Posted by Michael Turner at 8:02 AM No comments: