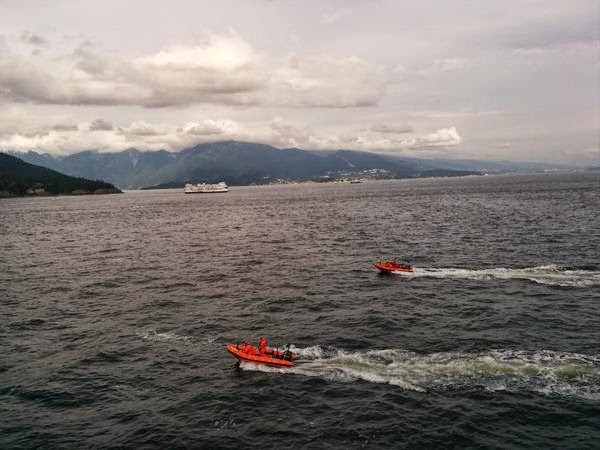 Yesterday's 3PM BC Ferries sailing from Departure Bay (Nanaimo) to Horseshoe Bay (West Vancouver) was going swimmingly until the captain announced that the approaching ferry, the Queen of Oak Bay, had a "man overboard," and that we, the Queen of Cowichan, might be asked to help in his (or her?) rescue.

Within minutes, both ferries had lowered their orange speedboats. Shortly after that, a dramatic entrance by the Coast Guard in an even faster speedboat, followed by that platypus of ocean-going vessels, the hovercraft.

During this half hour rescue there were a number of announcements made over our ship's public address system. Most concerned the kitchen staff, who were asked first to "return to your stations," and then to "stand down."

Later that night CKNW reported that the Queen of Oak Bay had cancelled the remainder of her daily sailings. News of these cancellations came from the BC Ferries Corporation Twitter feed. The picture posted by the Province newspaper also came from Twitter -- in this instance, from the mountain biker standing beside me.
Posted by Michael Turner at 8:35 AM No comments:

Posted by Michael Turner at 7:07 PM No comments: 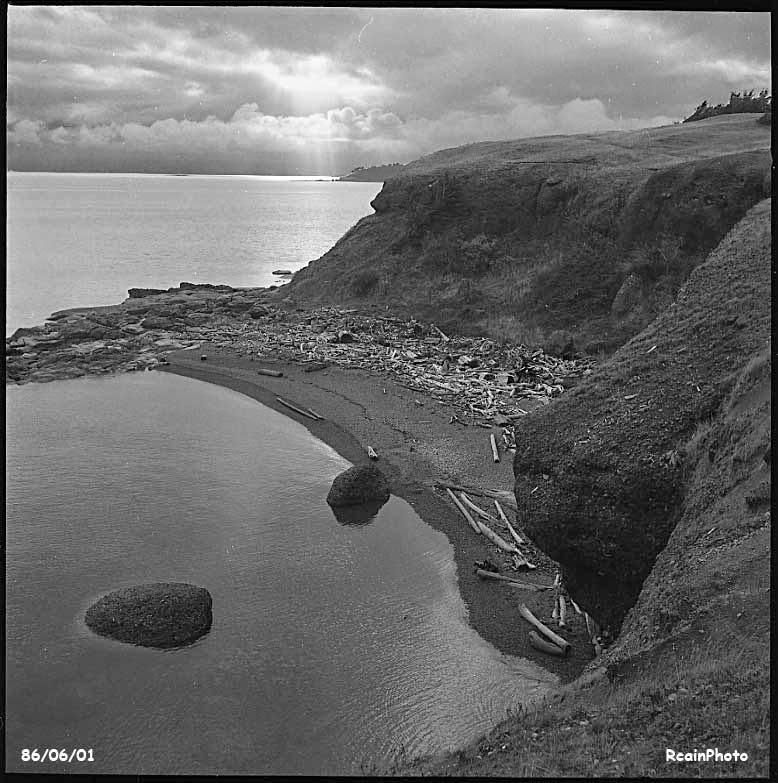 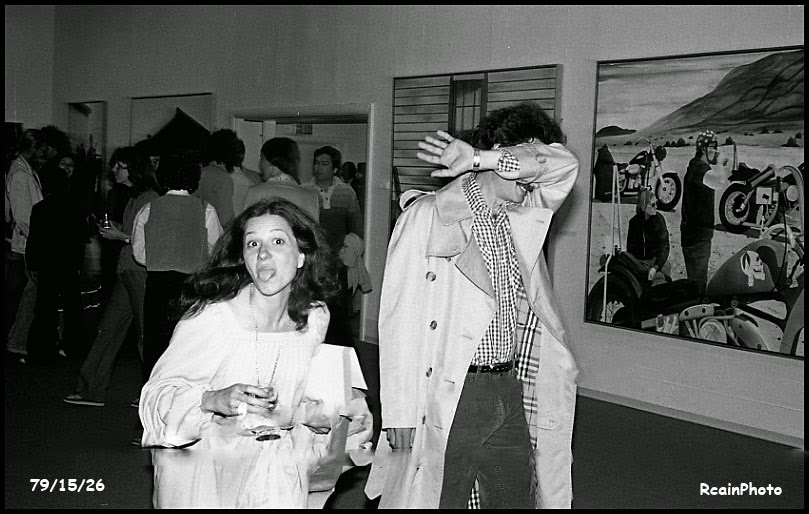 Posted by Michael Turner at 9:40 AM No comments: 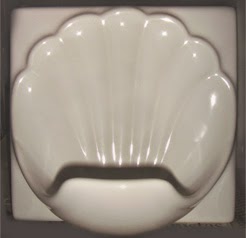 A soap holder you can find in any bathroom fixtures store. Or one that, while walking on the beach, finds you. 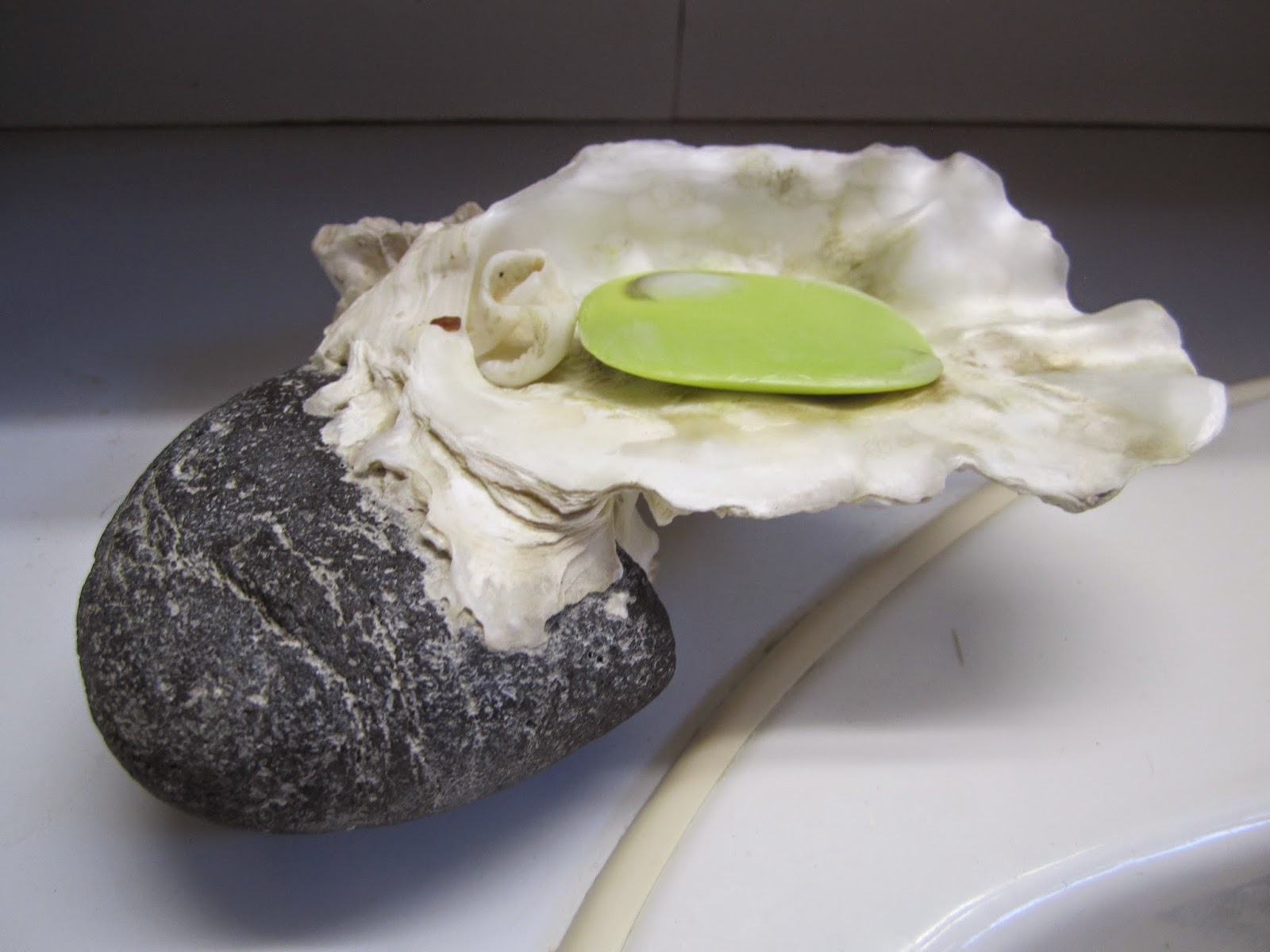 Posted by Michael Turner at 11:02 AM No comments: 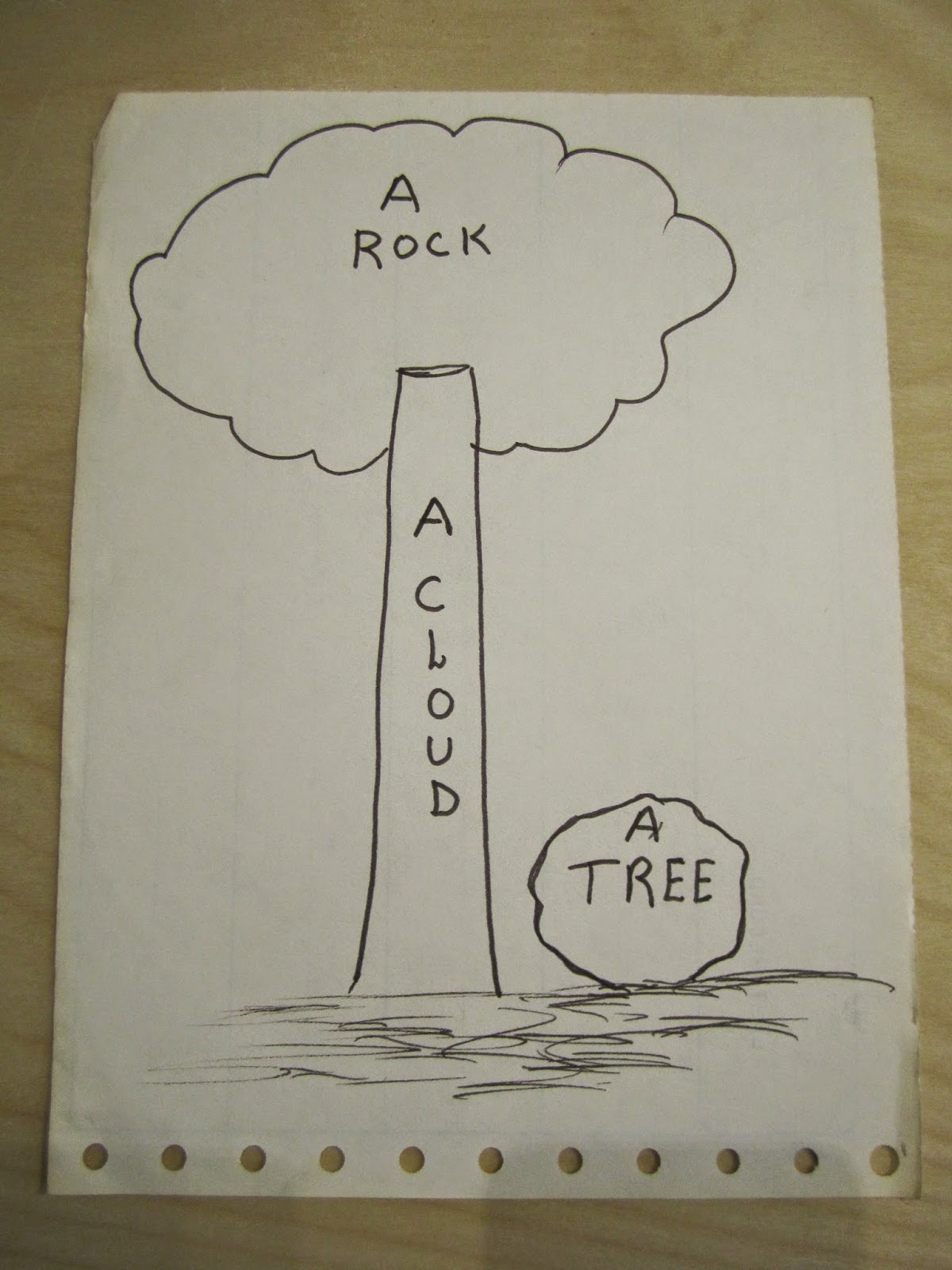 While driving to Hornby Island yesterday I passed the Fanny Bay exit sign and thought of the artist George Sawchuk (1927-2012).

Last year the Comox Valley Art Gallery mounted an exhibition of Sawchuk's portables, as well as a selection of his drawings.

Part of the exhibition included an event at Sawchuk's home. Although his Forest Gallery is a highlight, I am also fond of his studio, which his wife, Pat Helps, has faithfully preserved. 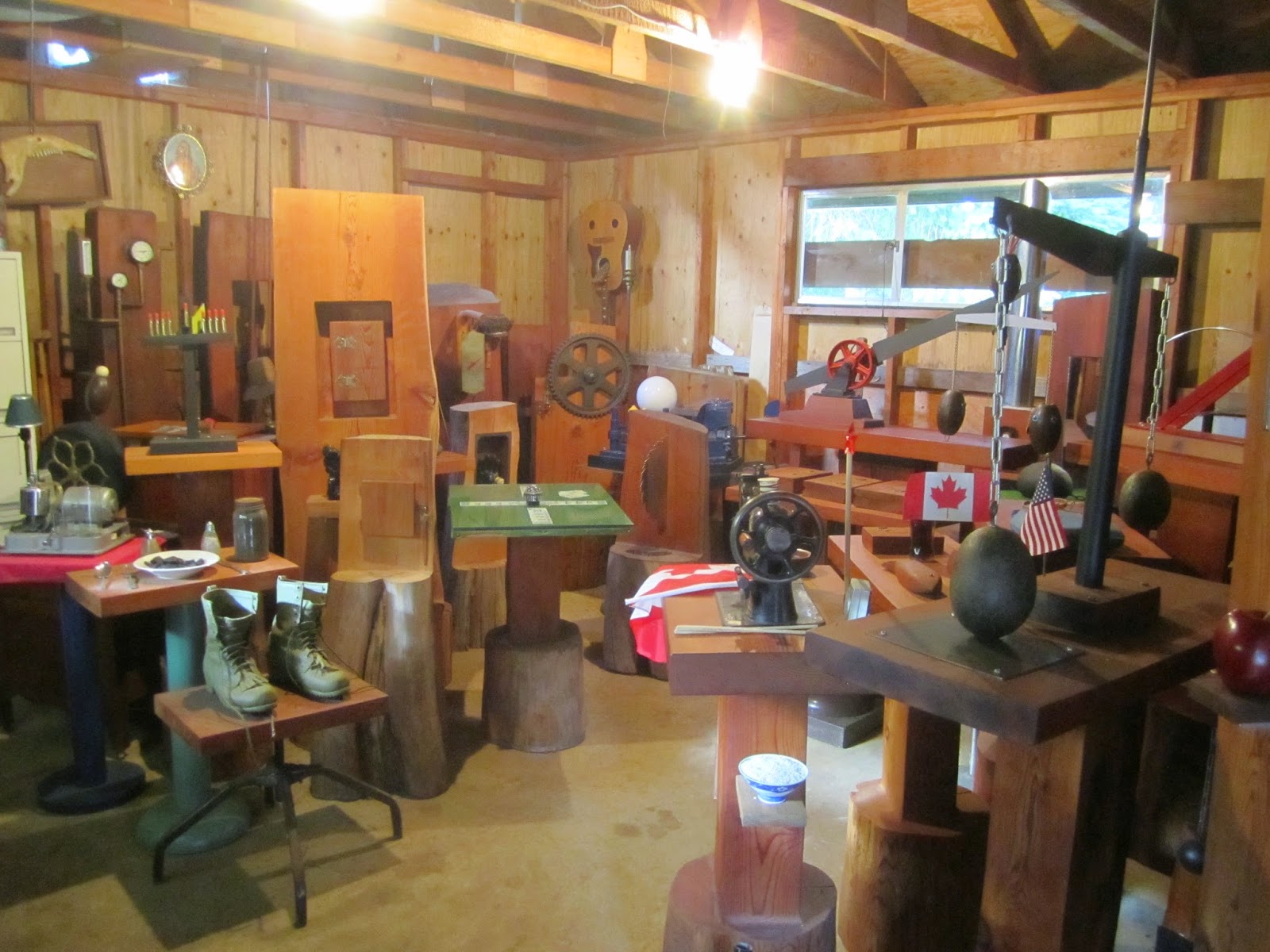 Posted by Michael Turner at 12:49 PM No comments:

Posted by Michael Turner at 7:08 AM No comments:

The Iceberg and the Monolith


Where the Modern object meets the Romantic gesture.

Posted by Michael Turner at 6:54 AM No comments:

The sink is white, and once, when I woke up in the middle of the night and saw the moonshine on it, I thought it was an iceberg, and I -- The Titanic!
Posted by Michael Turner at 7:48 AM No comments:

Posted by Michael Turner at 10:07 AM No comments:


No one came home from work like Mr. Rogers.
Posted by Michael Turner at 9:35 AM No comments:


Currently at the Contemporary Art Gallery is an exhibition by Jeremy Shaw entitled Medium-Based Time. Among the works in this show is Variation FQ (2011-13), a 16mm film that fuses a performance by transgender "Vogue" dancer Leiomy Maldonado with a step-and-repeat animation technique developed by Canadian filmmaker Norman McLaren in his 1968 ballet film Pas de deux.

Above is McLaren's best-known film, Neighbours (1952)
Posted by Michael Turner at 9:07 AM No comments:

Nice to see the Coalition of Vancouver Neighbourhoods getting some media traction now that the 2015 Vancouver Transportation and Transit Plebiscite ballots have arrived in our mailboxes. Unlike the ballot mailout, the CVN is asking more detailed questions concerning the relationship between the City and private development with respect to transit routes.

Scanning the list of member neighbourhoods, I see that mine is represented (Cedar Cottage Area Neighbours), but not the one I grew up in (Kerrisdale). I wonder why that is, given that the Arbutus railway corridor, which has been the subject of so much controversy, runs through it.
Posted by Michael Turner at 8:32 AM No comments:

Posted by Michael Turner at 7:59 AM No comments:


The screenings at last Sunday's Countercultures Forum were selected by event programmer Jesse McKee. These screenings were comprised of six film and video works, beginning with Buckminster Fuller Meets the Hippies (1966 or 1968); the Newsreel Collective's Garbage (1968); Videofreex's Women's Lib Discussion: Burning Theatre and Alternative U (1970),  Fred Hampton: Black Panthers in Chcago (1969) and Fred Hampton: Chant and Demonstration (1970); and Adrian Piper's The Mythic Being Cycle I 2/66 (1974). Up top is a "snapshot" of Adrian Piper interviewed in the 1980s. The topic is "performance art," but her response has more to do with activism than performance's object-indifferent cousin -- conceptualism.
Posted by Michael Turner at 8:32 AM No comments:


Yesterday's Countercultures Forum included a range of presentations and screenings, from Terje Toomistu and KIWA's discussion of Soviet era countercultural activities in Estonia to Videofreex's Fred Hampton: Chant and Demonstration (1970).

In addition to his presentation on Olympia, Grove and Semiotext(e), and when not outside smoking, Andrew Berardini provided "correspondent reports." Two nights before, Andrew was at Model, where he read from his "Colour Poems" project.

Here is a recent review Andrew wrote of Geoffrey Farmer's Cut nothing/cut parts/cut the whole/cut the order of time exhibition at Casey Kaplan.
Posted by Michael Turner at 11:19 AM No comments: 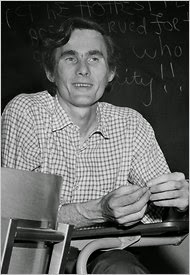 This afternoon, between noon and 5PM, Presentation House Gallery will host Countercultures Forum at Satellite Gallery. Mainstreeters: Talking Advantage, 1972-1982 co-curators Allison Collins and yours truly are among the presenters.

Pictured above is Theodore Roszak, the scholar who coined the term "counterculture" in his book The Making of a Counter Culture: Reflections on the Technocratic Society & Its Youthful Opposition (1969).

Not sure when this photo was taken. It might have been when Roszak taught at the University of British Columbia.
Posted by Michael Turner at 8:17 AM No comments:

Posted by Michael Turner at 12:38 PM No comments:


A couple of posts ago I quoted Drew Westen, a clinical psychologist and a beleaguered U.S. Democrat, who tells us in his book The Political Brain (2007) how, when it comes to politics, stories trump statistics.

In thinking about the kinds of stories politicians tell (George W. Bush was most certainly a storyteller), many of them, at least to my recollection, are homilies.

But as we are living in a moment when politicians have less and less time to make their point (I am old enough to remember when television commercials for even the most banal household products were a minute long), I entered "30 second homilies" into a search engine. What came up was the above video.

In this video we have a young priest announcing to his digital brethren that he is suspending his daily "30-Second Homilies" project. And in telling us why, he provides statistics.
Posted by Michael Turner at 8:27 AM No comments:


There is so much to object to in this fallacy-friendly video, from the conflation of "service" and "labour" in the YouTube description (notice that the Canadian Taxpayer's Federation uses the American spelling ["labor"] in its inter-titles), to Jordan Bateman's visual assessment of the clerks' behaviours. (Personally, I find the tranquility of the public-sector liquor store a welcome relief from "our" all-to-often rawk-oriented "free-market" versions.)

Apropos of yesterday's post, notice how Bateman refers to this as "the story [my italics] of our two liquor clerks." The same would apply to those many articles out there that, if you search-engineer "Why people vote against their best interests," speak of low-income white people in Kentucky -- some of whom have been helped by Obama's social and economic policies -- voting against the party that initiated those policies.

The racism in these articles is indeed operative at the tail end of the above video, where almost everyone pictured is white.
Posted by Michael Turner at 9:22 AM No comments:

Why People Vote Against Their Best Interests 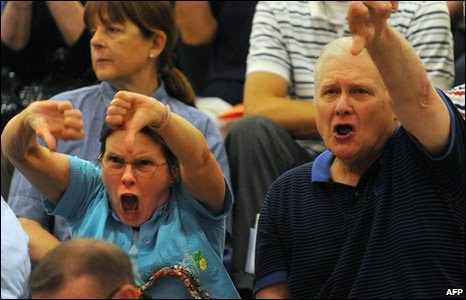 "For Mr Westen, stories always trump statistics, which means the politician with the best stories is going to win: 'One of the fallacies that politicians often have on the Left is that things are obvious, when they are not obvious.'"
Posted by Michael Turner at 9:09 AM No comments:


The upcoming TransLink referendum (a mail-in ballot) is asking Vancouverites whether they would accept a 0.5% hike in provincial sales tax to support the construction of a Broadway SkyTrain line, light rail in Surrey, the new Pattullo Bridge, additional buses and increased road maintenance.

Another take on this referendum can be found in Doug Ward's recent Tyee article (posted yesterday), which raises larger ideological questions concerning the welfare state, civil society and public life. Yet another take is not so much the question of public transportation, but an authority known as TransLink -- created by former Liberal MLA Transportation Minister Kevin Falcon.

Though the Tyee article focuses on the "No" side's Jordan Bateman, nothing is said of the "Yes" side's recent point-person, Jim Pattison, who, oddly enough, shares Bateman's libertarian tendencies.

The quote that best sums up this article (and indeed the history of liberal democracy) belongs to former Vancouver city councillor Gordon Price, who states: "That's the brilliance of Bateman's meme. How do you get people, even a bus rider, to vote against their best interests?"
Posted by Michael Turner at 9:31 AM No comments:

Posted by Michael Turner at 5:34 PM No comments:


Children in the state of Andhra Pradesh, India, are measured for school uniforms.
Posted by Michael Turner at 9:45 AM 1 comment: 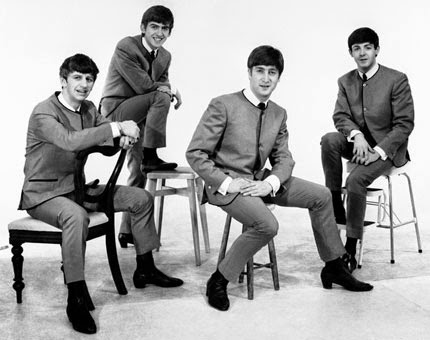 Fashion designer Douglas Millings took his inspiration from Pierre Cardin when he designed the Beatles' suits in the early-1960.

Below is Rolling Stones co-founder and multi-instrumentalist Brian Jones in a suit manufactured by Hugo Boss.

Posted by Michael Turner at 8:45 AM No comments: 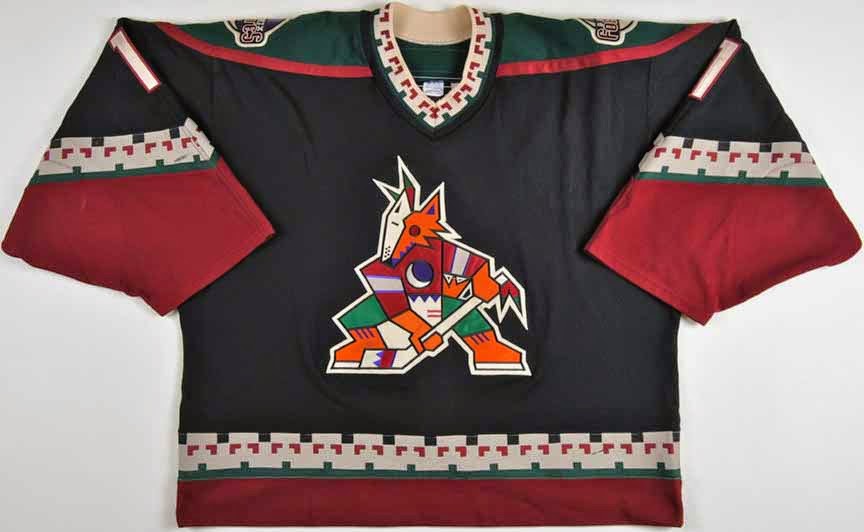 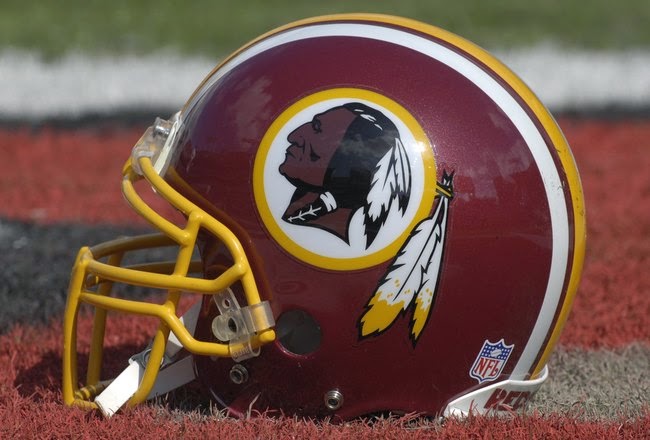 When the National Hockey League's Winnipeg Jets moved to Phonenix, Arizona, in 1996, ownership came up with a new nickname and a new uniform -- what is known as the "kachina uniform," after the Hopi spirit. When asked about the kachina logo, its designer Greg Fischer said:

"As we were moving into this the league gave their opinion on the colour palette they thought might work for a new NHL team and they were adamant about the logo. There were so many angry animals coming on board at that time and they were like 'do not do an angry animal logo because we'll never says yes.'"

However, when the team moved from multicultural Phoenix to honky Glendale in 2003, they changed the logo to a teeth-bearing ("angry"?) animal, and reduced the uniform's colour palette to "Bright Maroon," "Deep Wine," "Sedona Gold," and "Sand."

Posted by Michael Turner at 8:38 AM No comments:

Posted by Michael Turner at 12:02 AM No comments:

A Wink Is As Good As a Nod 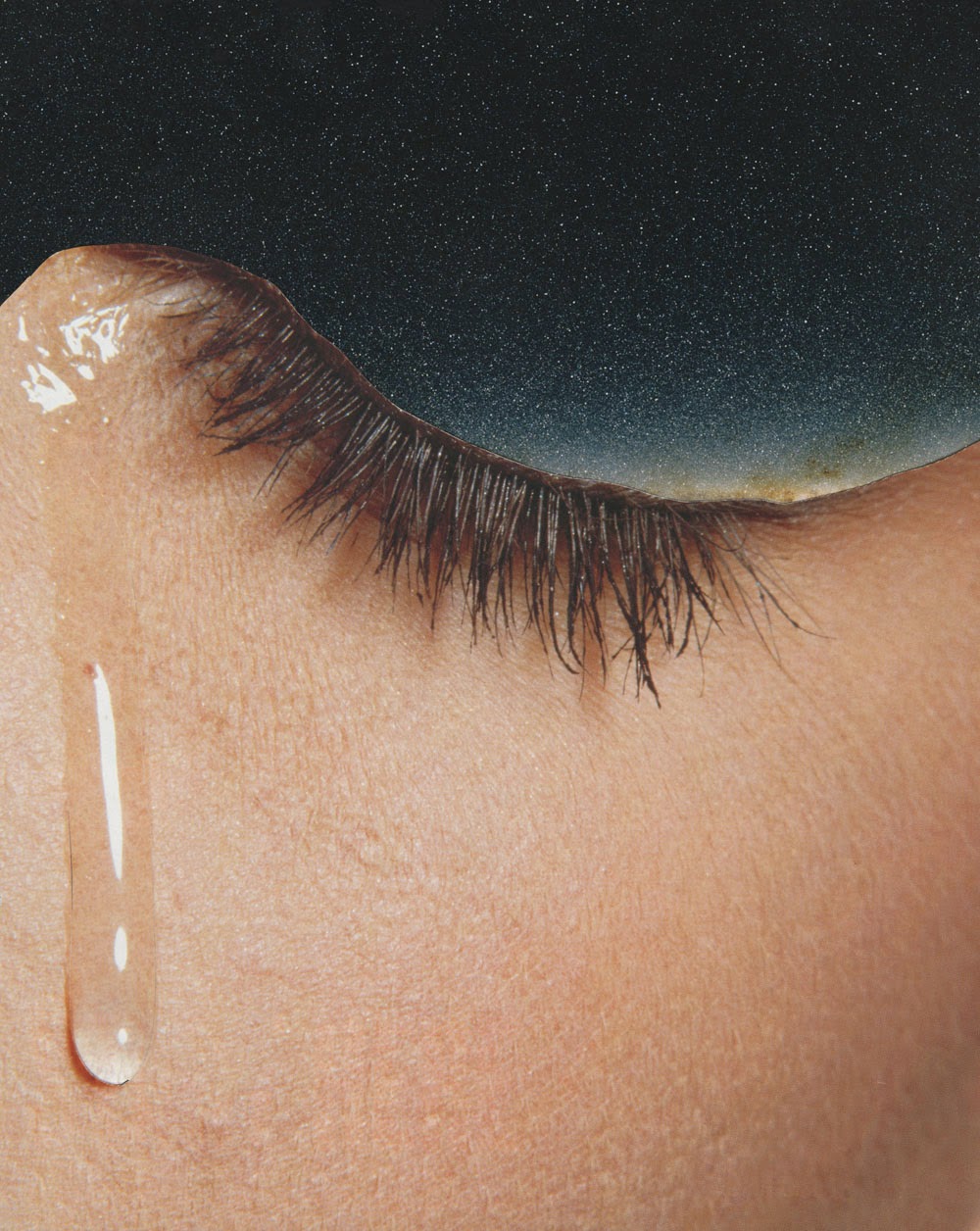 Elizabeth Zvonar's collages often bring to mind the work of John Stezaker.
Posted by Michael Turner at 2:15 PM No comments:

Art, Prosody and the Lash


Eight seconds of (and from) Julia Feyrer and Tamara Henderson's Bottles Under the Influence (2012) installation at the Walter Phillips Gallery, Banff, Alberta. 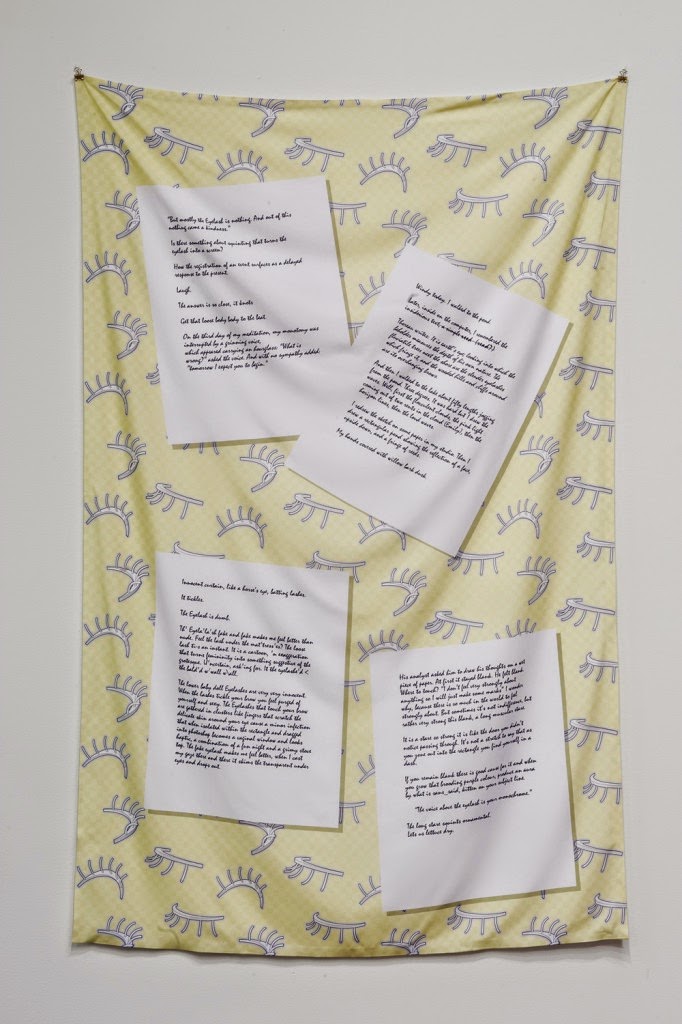 From another work in the exhibition, a text excerpt by La Melia: "The blank in the blink that is a source of inspiration./ Was the blink a wink? Think of the room as a mattress./ Not unlike a whisker, it vibrates, an eccentric state of mind, removes plaque."

Rosie Prata wrote a thoughtful review of La Melia's exhibition for Canadian Art. You can read it here.
Posted by Michael Turner at 9:39 AM No comments:

Last week I started Renata Adler's Speedboat (1976), a book I found on Pulp Fiction's "Staff Picks" shelf and discovered in its episodic fiction not a speedboat but a slow moving raft.

Beside the first paragraph I wrote "Tamara Henderson!" Then an arrow pointing here: "That was a dream, of course, but many of the most important things, I find, are the ones learned in your sleep."
Posted by Michael Turner at 5:39 PM No comments:

Posted by Michael Turner at 8:39 AM No comments: