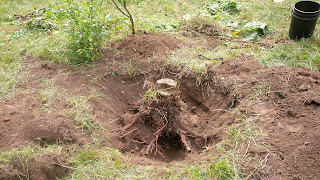 Plum trees do not live forever -- unlike apple trees, which live 35 to 40 years.

Though it no longer produces fruit, the stump above is still a plum. It reappeared after the grass was cut. Because it stands where a greenhouse is going, it has to go, too.

Removing a stump can be frustrating. You can hack away at it, eventually dislodging it, but you will hate it by then and I don't think that's fair to the tree it once was.

To remove this stump we dug around it until we found enough space between its roots to get between them with a chain, which we attached to the back of a tractor.

When digging around the stump it is important to not cut off too many roots, else they will continue to grow and produce suckers. To pull out a stump is to pull out its roots, too.

You can see the spot where the stump once stood.

The greenhouse will stand between the apples. 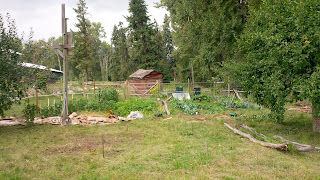