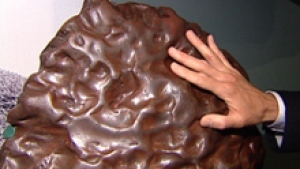 Like Richard did at the start of this residency, symposium participants were welcomed by Jordan, a young Syilx man who spoke to us of where we are, who the Syilx are, before singing the "Okanagan Song," a song that Jeanette sang before Margo introduced her mother, Eloisa, who told us about the Texas-Mexico border wall last month.

Following Jordan was Skawennati, who introduced Archer's funny and touching space-time performance document, Our Beautiful Future, and then David, who presented a condensed version of an address he gave in Australia about the colonial museum and its tendency to make dead the living, be it through variants of reason, rhetoric, accumulation or science -- a presentation that revolved nicely around the Manitou Stone (pictured up top). During the Q&A that followed (or was it the Q&A for Brian's talk after Heather's talk?), Loretta mentioned Leroy Little Bear's interest in quantum physics and waves in contrast to binaries like zeroes and ones.