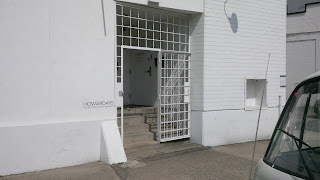 February 2020. A simpler time. Or an increasingly complicated time made simpler through our familiarity with it. Not the time itself but its associated attitudes, gadgets. Today, the times are neither simple nor complicated. We are numbed by subtraction, lost in new spaces both vast (why are there no other cars on the road?) and minuscule (half my day is spent at the kitchen table). I miss the hugs, the occasional restaurant dinner, going to art galleries ...

Back in February art advisor Krista Howard opened Howard 495 at 495 Railway Street (2nd Floor). I was not there for the opening, but I was there yesterday with Reid to walk through its current exhibition, held in conjunction with the Capture Photography Festival. 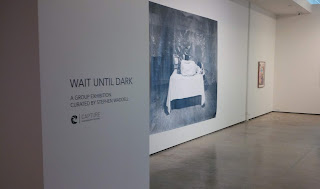 Curated by artist Stephen Waddell, Wait Until Dark features eleven works by eight artists -- Hannah Collins, Wols, Miroslav Tichy,  Giulio Paolini, Jacqueline De Jong, Michelangelo Pistoletto, Rineke Dijkstra and Thomas Ruff. All but one work offer evidence of the figure, though to be fair Collins's In the Course of Time 12 (Small Fire) (1988) contains within its burn what looks to be a printed budget, as evidenced by its column of figures.

Columns are also evoked in Paolini's gridded quartet Ritratto Dell'Artista Come Modella (Portrait of the Artist as a Model) (1980), where imposed over/montaged onto a photo of a statue is a slightly smaller vertical rectangle, inside which the statue is reproduced, redrawn, redesigned or voided (white). In addition to the backgrounded statue's head are its feet, bringing to mind Shelley's as-told-to poem "Ozymandias" (1818) -- "'Two vast and trunkless legs of stone/ Stand in the desert ...'" So more spaces to explore, negotiate, contend with.

(Was this a dream -- that I went to a gallery yesterday? I look at my notes again, the pictures I took. I was there, wasn't I? Krista was dressed in black, and Stephen told us how he cold-called Collins to ask her for some work -- "and she said yes!")