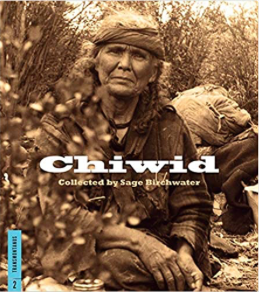 When I first came out from England in 1920, the attitude toward native people was very bad. They were frightfully poor and badly diseased. They were just getting over the flu of 1918 that killed at least half them. Then the winter before I was here, they got the measles. And that killed them off just like flies. They couldn't fight it at all. They just laid down and died, you might say. It was very tough. (55)

So says Tom Chignell, who "preempted the Halfway Ranch near Tatla Lake, halfway between Williams Lake and Bella Coola," according to Sage Birchwater, whose Chiwid (Transmontanus/New Star, 1994) is an oral history centred on the life of Louise Skinner (b. 1904, aka Chiwid), a remarkable woman of Tsilhqot'in (mother) and English (father) descent who survived domestic abuse and lived most of her life outdoors, hunting, trapping and shepherding.

Chiwid is the second in the 23 volume Transmontanus series, edited by Terry Glavin in conjunction with New Star. The intent of the series is to present a history of British Columbia with sharper teeth than the more romantic, or indeed ethnocentric, versions we have come to know.

It is my intention to read (and in some cases, re-read) the series towards a volume of excerpts, similar to how Birchwater and Glavin composed the oral contributions that make up Chiwid. In my case, I am more interested in (off-centred) stories within the main story. In the first volume, Glavin's A Ghost in the Water (1994), it is not the Fraser River sturgeon that interests me but a story told to Glavin by Katzie chief Carl Leon about Thunderbird Hole, "a cave halfway up a sheer wall of rock above the east bank of Pitt Lake."

Posted by Michael Turner at 9:16 AM