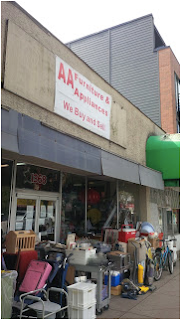 Walking back from the Save-On with my weekly groceries I noticed on top of A&A Furniture and Appliance's book box Peter Manso's 1000+ page Brando: the Biography (1994), and underneath that, Ronald A. Wells's beautifully introduced America Observed: the Newspaper Years of Alistair Cooke (1988), a selection of the ex-Brit's mostly Guardian articles from 1947-1972 (plus a few add-ons).

The Brando book is exactly what I need for summer reading ("His determination to prosper, even as a young man, had schooled him in the advantages of silence ..."), while the Cooke book, for all its swirling yet nuanced prose, provides evidence of what it looks like to write and publish daily, like I used to do with this blog.

Here is Cooke speaking in the "Introduction":

I suppose, not to beat around the bush, that much of what I take to be the social sickness of the time -- beginning in the Sixties and exacerbated in the Eighties -- could be attributed by a moralist to a clutch of certain deadly sins: namely, greed, envy, lust, covetousness [Ed. Note: Is "namely" a sin?]. Not to leave anyone with the pious feeling that he/she is out of "the mainstream," I'd say that the conservative sin is secret greed (holding on to what you've got); whereas the liberal sin is self-righteousness ("Why aren't you more like me?"). I guess lust is no respecter of class, gender, colour, or party -- just epidemic. (15)

Posted by Michael Turner at 8:07 AM