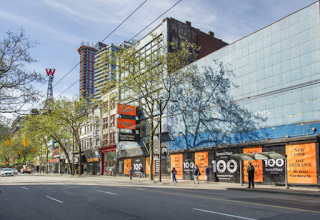 After 101 years in business, Army & Navy announced yesterday that it has permanently closed its retail stores. Included is the flagship building complex on Hastings and Cordova Streets (where my father bought me my first suit, when they sold suits). No mention of what is to become of these buildings, but speculation is rampant. One strand groans "Market housing," another (more optimistically) "Social housing!" Either way, it's an Alamo. Like Woodward's after it closed (in 1993).