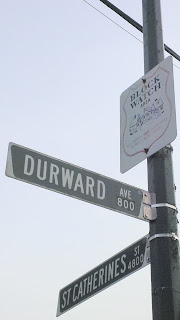 Quentin Durward (1823) is a novel by the Scottish writer Walter Scott (1771-1832). Contrary to Vancouver is Awesome, Scott's protagonist is not the source of Vancouver's Durward Street; that distinction belongs to Elizabeth "Bonnie" Durward, who came to Canada from Scotland in 1894 to work as a maid for a family that shall remain nameless.

Shortly after her arrival, Durward fled her situation and took up with the McKinnon Sisters, who raised chickens at the edge of the Tea Swamp just east of what is now Fraser Street (at 27th Avenue). Durward made tinctures from the Labrador Tea plant (Rhododendron neoglandulosum) that thrived in the swamp's boggy soil. So effective was this plant in treating bronchitis that she came to the attention of Mayor Henry Collins, who recommended that a street be named after her.

In 1902 Durward returned to Scotland to marry a Major Clark Ross, and was never heard from again. 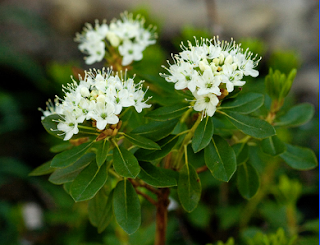