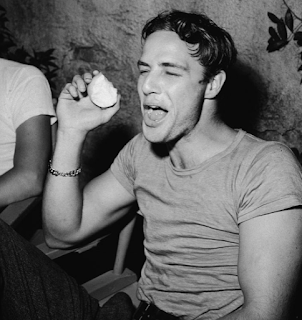 I am now 129 pages into Peter Manso's biography of Marlon Brando. The year is 1943. Brando is nineteen and living in New York City, a student at the Dramatic Workshop. He is the darling of Stella Adler, but not of her colleague, Erwin Piscator. As with most biographies, everything that happens in childhood anticipates the adult.

Bud [Brando's nickname] conquers through withholding. It's what his father did, too. Marlon, Sr. was much less imaginative about the whole process and used it maybe in a more brutal, one-track kind of way, but the tendency was there. (121)

A few pages earlier, in a discussion of genius and acting, Manso gives us this:

It is impossible to analyze the ingredients that make for genius, yet a few qualities seem to be dominant: instinct, unswayable personal standards, and what Bobby Lewis calls "a profound ambivalence." Lewis, who later trained Brando at the Actor's Studo, says he was "like an animal. He wasn't always able to put things into words, but at any given moment he could sniff out everything." Maureen Stapleton  sees it as an extraordinary type of intelligence:"I think that he knows things that are deeply rooted, maybe what you have to describe as the pain.... I don't think anybody could fool him." Dick Loving suggests yet another component, "a certain kind of consciousness about the importance of sexuality in life and art." (116)

Lewis's comments -- about not being able to put words to what one does -- reminds me of another artist living in New York at this time, the painter Jackson Pollock. So far, Manso makes no mention of anything else going on in New York; but then, this doesn't appear to be that kind of biography.

Here is an excerpt from a June, 1943 letter Pollock, Adolph Gottlieb, Mark Rothko (and Barnett Newman) wrote to the New York Times:

To us, art is an adventure into the unknown world of the imagination which is fancy-free and violently opposed to common sense. There is no such thing as a good painting about nothing. We assert that the subject is critical.

Posted by Michael Turner at 1:18 PM