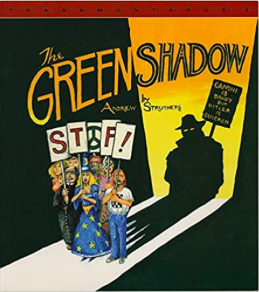 The cover of Andrew Struthers's first book suggests a graphic novel, but crack its spine and its mostly paragraphs animated by Struther's early-Crumb-like b&w style. Carried in these 'graphs is Struther's life and times in Tofino in the 1980s and 90s, where we hear tales of the town's environmentalists, loggers, entrepreneurs and politicians.

Equal parts Erma Bombeck and Hunter S. Thompson, The Green Shadow is a rollicking read by a well-read, hyper-self-reflexive bro out to understand the world and his place in it. For those interested in Strutters's more recent YouTube juggernaut, click here. In the meantime, a nice paragraph from Chapter 5, where Struthers goes shrimping with Captain Bob:

We had another beer and pretty soon we were talking about death.  Then about ghosts. Then about those circles in wheat fields. Then about pyramids. Bob was Mr. Rational. He figured ghosts were a kind of mirage.  Those crop circles were made by two old farmers with a log.  Pyramids were smaller at the top because the Egyptians ran out of slaves. And so on. He figured it was kind of mental illness to believe in something when you had no proof. A few more beers and we were talking about mental illness. Then about how Bob was mentally ill, and had been for many years. (59)

Posted by Michael Turner at 9:12 PM