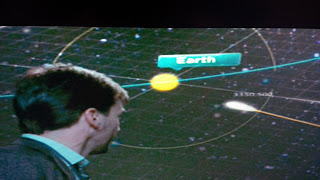 Every now and then an unidentified flying object (UFO) is sighted and it is the nature of its media coverage (and our response to it) that tells us who we are and where we are at. The most recent coverage, which includes the U.S. Navy's decision to re-brand that which is unknown and travels by air as an Unidentified Aerial Phenomenon (UAP), comes at a time when our collective minds are pre-occupied, much like they were in 1938, when the world stood by and watched as Nazi Germany gobbled up parts of Czechoslovakia and all of Austria, and in October of that year Orson Wells broadcast his fake-umentary adaptation of H.G. Wells's War of the Worlds (1898), an event so convincing that some jumped out their windows to their death.

Posted by Michael Turner at 8:17 AM