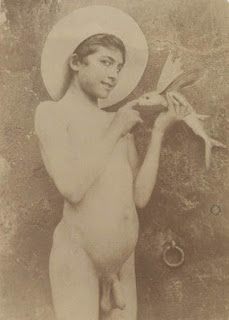 The above picture was taken by Wilhem Von Gloeden (1856-1931) in Taormina, Sicily (circa 1890) and was printed onto an 8"x 6" piece of salted paper. Although the picture remained untitled during the artist's lifetime, those who know it know it as (Untitled) Boy With Flying Fish.

Looking at this picture, one might think that the glass plate its image was captured on was overexposed. It was not. The appearance of overexposure likely occurred during the printing process, or the print could have faded from prolonged exposure to the sun. Either way, it lacks detail. And in lacking detail it re-enforces something of the social conditions in which its model emerged.

Here is a better print, a Von Gloeden double portrait: 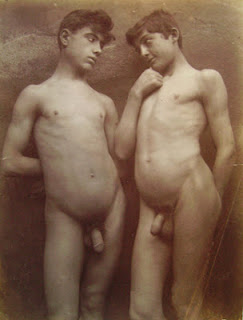 When Von Gloeden arrived at Taormina in the 1880s he did so as an aristocrat with bad lungs who was told by his doctor to live somewhere warmer, or die young. So, like Goethe before him, he travelled to the impoverished cliff-top fishing village of Taormina, where, after a period of time, he befriended the villagers (and most importantly, its priest) and set out not to paint what he saw, for he had studied painting, but to take pictures with this new fangled device called a camera.

Von Gloeden's earliest pictures were ethnographic studies of the village and its industry. However, once he had gained the trust of its residents, he began asking that they "sit" for his photos. The subject of these photos soon enough focused on the village's young men, whom Von Gloeden often dressed up as ancients and placed in the natural landscape or, as you have seen, did away with dress altogether. 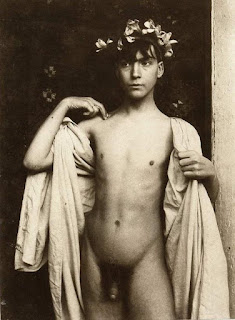 The two biggest fads at the end of 19th century were antiquity and photography. The former fetishized an arcadian past (in contrast to a potential workers utopia based on a "dictatorship of the proletariat"); the latter a new way to capture life and, like the head of an animal shot on safari, something to hang on your wall. As the 19th century gave way to the 20th, Von Gloeden signed a contract with a post card manufacturer.

Prior to Von Gloeden, Victorian representations of the body were ethereal, wispy, Symbolic -- not at all related to the "base" earthy body that Von Gloeden had captured (nor the "improved upon" body advocated by Rudolf Steiner that eventually supplanted Von Gloeden's). Once released, Von Gloeden post cards proved to be extremely popular, so much so that fans flocked to his studio, eager to purchase larger prints, but also to meet his models. Some of these fans included Oscar Wilde, Sarah Bernhardt and Douglas Fairbanks.

A question that often comes up on the topic of Von Gloeden is, Did he compensate his models? He did. But he did not pay them money, he gave them gifts, as was the local tradition. Clothing, food, appliances -- but never money. Another question is, How was he allowed to take these pictures? The answer to which comes from the locals themselves, a people proud of their bodies, aware that their bodies reflected the work they did but also their underexposure to certain nutrients, which explains the distended malnourished bellies.

In the winter of 2001 I was invited to a Canadian Studies conference in Messina, Sicily, where one of the local scholars, a man in his late-sixties, took me to Taormina and toured me through its village. Although small, this was by no means the waning fishing village that Von Gloeden arrived at in the 1880s but a impeccably-detailed well-heeled tourist destination with a Gucci store. At the end of its narrow cobbled road was a huge public patio that overlooked the Mediterranean and, in the distance, Mount Etna.

While impressed with the view, what held my attention was not the sea or the volcano but those on the patio, many of them middle-aged American men, a number of whom had the unmistakeable look of end-stage AIDS. It was then that I turned to my guide and, before I could say anything, he told me how, after the Second World War, American men would arrive at Taormina with huge bales of Levi-Strauss jeans, and these bales would tell you why they were there and what they were interested in.

On our return to Messina I asked the scholar if Taormina is still a site of sex tourism, to which he replied that it is less a site of sex tourism than a reluctant memorial to one, as evidenced by the dying faces on the patio, but especially the quiet trade shopkeepers engage in behind their counters, where Von Gloeden products are sold.
Posted by Michael Turner at 10:11 AM