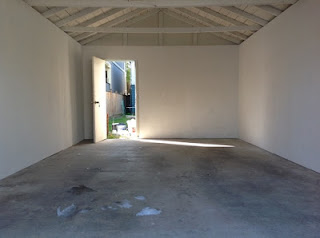 During my years as a board member at Presentation House Gallery I had the pleasure of working with staff on a number of projects -- the 2010 Candahar program (see yesterday's post) but also the gallery's annual fundraising dinners. One of those staff members is artist Erik Hood, the gallery preparator.

A few months ago I received an email from Erik apprising me of a gallery he was opening in his garage, called Hardscrabble Gallery, after a farm on Mayne Island that Erik and others recognize as a node in their cultural ecological network (the mandate of the gallery is to "satisfy both country self and city self"). While I missed Jacob Gleeson's The Tent Shop (2012), I was able to attend last night's exhibition/performance/vernaissage -- Gather (2013) by Michael Drebert.

I have been interested in Drebert's work since I was first introduced to it as a writer for the Contemporary Art Gallery's 2009 Sentimental Journey exhibition catalogue. For the CAG show, Drebert took a ball from Crash Crawley's ball room, dipped it in the Ganges River, then returned it to Crawley's upon his return to Vancouver. A more recent Drebert work is his contribution to the Or  Gallery's Things' Matter exhibition, which had the artist engage in a similar mission-driven project, only this time it was to return to Japan a glass fishing float that had washed up on the shores of Haida Gwaii.

For Gather, Michael and Erik travelled to Steveston's Garry Point, where they filled a car with water-logged beach wood, after which Michael arranged the wood into two piles in Erik's garage, along with two wall works Drebert had drawn (with eyes closed) based on the eagles he and Erik had seen during separate stays on Haida Gwaii. Last night, Michael burned this wood in a three-brick-high fire pit Erik built from chimney bricks taken from a nearby demo.

Originally my plan was to drop into Hardscrabble for the 7PM "lighting," en route to the Western Front for Ieva Misevičiûté's performance (part of curator Jesse Birch's Edible Glasses exhibition). But from the first touch of Drebert's match to the fist-sized paper balls tucked inside their tiny wooden pyramid, I was rapt -- as much by Drebert's lesson in fire-building as his essay in water management (allowing the fire to dry his wood before feeding that wood into it).