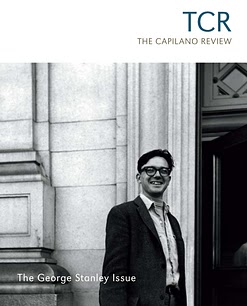 I am not sure why this is, why it does not stick, and in saying so I do not mean to deny George, for he deserves more than he is given.

If George wanted more, if he told us he wanted more, every one of us would raise a collection. Problem is, we all have our ideas about George, and because George is not interested in helping us, he gets less.

Ted Byrne is a gifted and generous reader and writer who, when he writes, gives us his best thoughts in their best clothes. In his reading of George's A Tall, Serious Girl (2003), Ted gives us companions to our own thoughts about what George does when we read him.

A Tall, Serious Girl contains a poem that Ted describes as "perfect," in the way perfection allows a poem to enter a high school anthology, "alongside Emily Dickinson and Robert Frost." That poem is "Veracruz".

What makes "Veracruz" perfect is not its technique, nor its content, but Ted's imagination of it in a high school anthology (the kind that "probably don't exist anymore"), where it could probably do some good.

George's most recent book is Vancouver: A Poem (2008), a book I cherish yet want more from. More in the way we want more from the diffident, particularly when we are attracted to them.

At one point George recognized his diffidence. Back then it was his shield; now it is his club, his shillelagh. What I do not get from Vancouver: A Poem is George beating me with his shillelagh.
Posted by Michael Turner at 8:01 AM