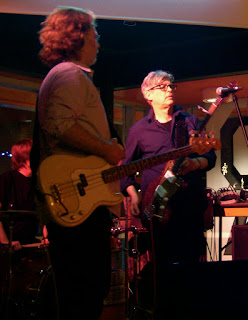 As usual I arrive on the dot, where I find what is now Andrew Dadson's spacious north-south rectangular studio broken in the middle by a horizontal east-west chandelier, below which (from the east wall) is a floor-level stage populated with monitors, instruments and foot-lights.

Zane, the only other person in the room as I entered, walks with me as I make my way to the rear of the building, where I assume the bar is, with Zane casually stepping behind it as I stare at the bottles on top. I point to a nicer-than-average merlot and Zane places a small plastic wine glass before me, then pours. Three sips later the room is filled with the well-dressed crowd I see at everything Rodney does.

Although scheduled for 9PM, the concert does not begin until 9:30, when Rodney's bandmates, all of who share the same flu virus, take to the stage. I have known three of the four musicians since they were in high school, when I was active in the local music scene, but now I know them as world-weary musicians who, among other gigs, are regulars in Rodney's band.

Rodney's songs are straight-ahead mid-tempo numbers that forsake rhythmic complexity for bright washes of colour supplied by lead and steel guitars, allowing his finite vocals to sit like a chip from a 7Up bottle in a diamond-encrusted setting. While I have heard his words both "live" and on his records, they are inaudible in a room built for paint, not music

After six songs I decide I have had enough "live" music for the evening and slip out the door, recalling an early concert of Rodney's when I programmed the Candahar Bar for Presentation House Gallery at the 2010 Winter Olympics. The first thing I did upon receiving this commission (held in conjunction with Theo Simms's bar-in-a-box) was to write a theme song, the lyrics for which (except for the line "Everyone is high but me") were plucked from twelve Rodney Graham songs. This is the song I had in my head as I made my way to the Dunlevy Snack Bar, for a nightcap.
Posted by Michael Turner at 3:22 PM

Labels: Night in the City