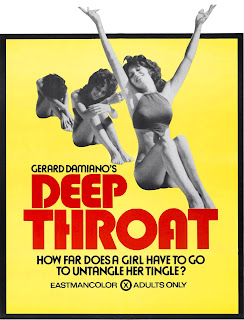 Of the three X-rated films of the early-1970s, Deep Throat (1972), starring Linda Lovelace, is the best-known, the most popular and the campiest, in some ways the last link to the vaudeville era. Within a year of its release, the title entered the lexicon as the name Bob Woodward gave to the informant who helped him and Carl Bernstein piece together what became known as "Watergate", a political scandal that brought down the Nixon Administration.

While middle-class audiences lined up to see Deep Throat (and the seedy theatres that showed it), some denounced the film as sexist and exploitive, while others, such as Linda Williams, took its tag-line ("How far does a girl have to go to untangle her tingle?") as a story of female empowerment: a woman, unable to orgasm, seeks professional help and is told by her doctor that her clitoris is in her throat. From there she pursues those who can reach it.
Posted by Michael Turner at 9:18 AM