The Skinny on the Straight 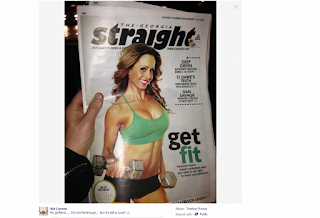 Last month our friends Vish and Billy visited from Los Angeles. Vish attended school here, before leaving for L.A. to do his MFA. Billy is originally from Texas but has lived in L.A. for the past twenty years, writing plays and the occasional Simpsons episode. Until last month, Billy had never set foot in Canada.

On Vish and Billy's last night, our friends Ron and Sylvain threw a party, where Billy referred to us as "a bunch of skinny Canadians," a comment that was met with laughs. But it was true -- everyone in the room was skinny. Including Billy.

Vancouverites have gotten skinnier over the years. I would say the same of our city's dailies and weeklies, particularly the Georgia Straight, which, apart from an increase in back page dating opportunities, seems dependent on a diet of real estate ads.

Just as the Georgia Straight featured movie and rock stars on its covers in the 1980s (in order to gain access to them), today's Straight is beholden to real estate marketers. How else would you explain the paper's recent profile on another skinny Vancouverite, Bob Rennie -- in an educational supplement, no less. (For those who recall Rennie's attack on VAG director Kathleen Bartels, check out the profile's last lines.)

The Rennie profile was written by anther skinny Vancouverite, Charlie Smith -- the same Charlie Smith who had the temerity to take on Waldorf Promotions during a recent wave of sympathetic media coverage. Of course another way of looking at Charlie's investigation of Waldorf Promotions is that of a man whose paper is underwritten by real estate companies, a group that includes Bob Rennie.
Posted by Michael Turner at 6:53 PM