"The world is where young people live" 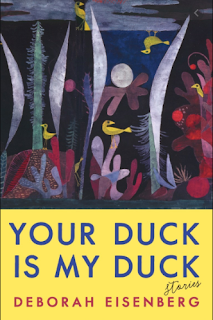 Like Nell Zink's The Wallcreeper (2014), Joanne Ruocco's Dan (2014) is also published by Dorothy of St. Louis. It too is a romp, a thoroughly U.S. American literary sub-genre that owes more to 21st century anxiety than its home-bound cousin, depression.

Another book in our reading list is the story collection Your Duck Is My Duck (2018) by Deborah Eisenberg. The eponymous first story is recognizable to any artist taken up by wealthy patrons; the second, "Taj Mahal", concerns Emma, the daughter of a famous ingenue-y movie star (Zoe) who lunches with her late mother's actor friends, who have gathered to discuss a memoir by the dis-remembered grandson of the group's paterfamilias, Anton.

"But the worst thing is you're not exactly part of the world any longer. When you're young, everyone is holding hands, all your friends, even the people you don't like, everyone in the world, but at a certain point, when you get older, you float a little off the surface of the earth. Everyone is rising up off the surface of the earth, everyone is farther from one another -- you can't hold hands any longer, you stretch out your hand, but you can't reach anyone else's, and when you look down, you see that what you thought was the world is just wrapping around the world, a loose, disintegrating wrapper, with a faded picture of the world on it. The world is where young people live." (59)

Posted by Michael Turner at 8:39 AM