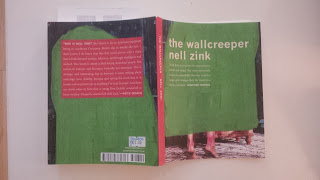 Last month I was given a list of books to read in advance of some meetings with a younger writer/editor whose work I admire and who chose me to help pilot a manuscript she is captaining. Some of these writers I am familiar with (Ingeborg Bachmann, Donald Barthelme, Richard Brautigan, Nathalie Saurraute, Daphne Marlatt,  Susan Sontag), others I was not (Nell Zink, Renee Gladman, Lucy Ives, Fleur Jaeggy, Joanne Rocco). Of the writers I was not familiar with, Jaeggy's collection of seven stories -- Last Vanities (1994; translated from the Italian by Tim Parks, 1998) -- brilliantly transcends both the knot and its bow. The book I am currently reading, Zink's The Wallcreeper (2014), is a looser, though no less minimal, weave.

Although only 66 pages into The Wallcreeper (Zink's first novel), I find my relationship to the narrator (an American named Tiffany) alternating between attraction and repulsion. Attraction to the humorous insights and the knowledge base that enables it; repulsion towards the character's cynicism ("We failed technology when it needed us most") and the libertarianism that justifies it (Is Zink, like Tiffany, a climate-change denier, or is she a satirist? Does it matter?)

At her best, Zink does two things well. In addition to rehabilitating the simile ("His awkward hands reminded me of the flames around Joan of Arc at the stake"), she is most adept at juxtaposition. Here's one (from the first page):

"I opened the door and put my feet outside, threw up, and lay down, not in the vomit but near it. The fir tops next to me had their roots at the bottom of the cliff."

Here's another (within the line itself) that involves Tiffany's family's visit to Switzerland, where she and her IT specialist husband are living:

"I took my parents to a craft market so Stephen could sleep with my sister."

Something else: legend has it that Zink wrote the first draft of The Wallcreeper in three weeks, to prove to Jonathan Franzen, with whom she was corresponding, that she knew what she was doing as a literary writer. I believe it, too, because writing like this often comes in concentrated bursts. Whether Zink can maintain that energy, or indeed modulate it in new directions, was called into question in a 2016 Atlantic review of her third book, Nicotine (2016), which Juliet Lapidos refers to as a "disappointment." She writes: "Third time around, Zink skips the telling nuances and settles for hurried farce."

Where (or how many times) have we heard this before -- the story of a writer who explodes onto the scene with something new and unusually relevant, only to abandon subtlety for laughs in subsequent works? From Erma Bombeck to Douglas Coupland, the list is long. Here is Lawrence Ferlinghetti in a 1985 Vanity Fair article on Brautigan:

"As an editor I was always waiting for Richard to grow up as a writer. It seems to me he was essentially a naïf, and I don't think he cultivated that childishness, I think it came naturally. It was like he was much more in tune with the trout in America than with people."

Not sure I would call Zink a "naïf" (nor Brautigan, too, for that matter, as writers like he and Clarice Lispector belong more to the autism spectrum than something as medieval as a naif). As for having more in common with animals than with people, that appears to be case with Tiffany's husband Stephen, who is devastated by the murder of Rudolph, the couple's pet wallcreeper.