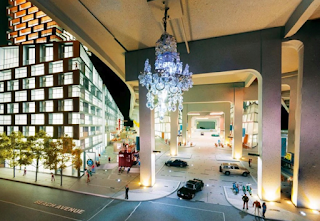 Less than a week to go before artist Rodney Graham's Spinning Chandelier drops (literally) from the underside of the north end of the Granville Street Bridge. As I understand it, the chandelier is designed to climb towards the bridge deck, where at a certain point it releases itself and twirls down, to begin again (twice a day).

For those already bashing it, calling it "tacky," let's consider this work in relation to a city that uses a military armament as a timepiece -- the beloved 9 O'Clock Gun. 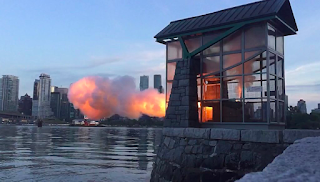 Those who know the history of the Gun (a 12-pound muzzle-loaded naval cannon) will recall that it was placed at the Stanley Park side of Coal Harbour in 1898, to notify fishers of the end of the fishing day. This was when Vancouver's economic base was resource extraction (furs, gold, fish, timber), not the service-oriented (IT, film and television, real estate, tourism, gambling/money laundering) resort it is today.

So with this economic shift in mind (and the ever-increasing disparities that go with it), can we not have a public art work that, like the city itself, both attracts and repulses? I say yes. But let's call it for what it is -- not simply a chandelier, but a release.

Posted by Michael Turner at 8:58 AM