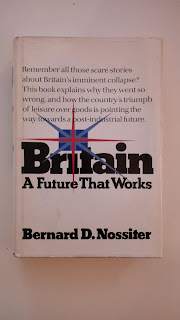 Bernard Nossitor's Britain: A Future That Works (1978) argues that the crisis that characterized the UK in the 1970s was in fact a state of "hypochondria," presumably induced by those eager to crush the welfare state, trade unions and intellectuals disposed to egalitarianism and thus make the world safe for neoliberalism. Are Boris Johnson and his kind employing a similar tactic?

Here is the conclusion of Ian Jack's great long 2009 LRB review of Andy Beckett's When the Lights Went Out: Britain in the Seventies:

In a book entitled Britain: A Future That Works, the Washington Post’s London correspondent, Bernard Nossiter, was by early 1978 able to wonder if the mid-1970s ‘crisis’ had not been ‘a case of hypochondria’. Nossiter felt London to be ‘the last inhabitable great city’, full of relaxed citizens who had discovered what would now be called a happy work-life balance, as opposed to what Nossiter described as the ‘nervous intensity’ of the crowds in Paris and New York. Britons, he suggested, might be ‘the first citizens of the post-industrial age . . . choosing leisure over goods’. As Beckett points out, Nossiter was known to have soppy Anglophile tendencies; still, there was something to what he wrote. If greater equality nourishes happiness and the public good, as many have come to believe, then it should never be forgotten that in the late 1970s Britain became a more equal country than it had probably ever been and certainly than it has been since. Beckett’s book is not all out revisionism; the facts of industrial turmoil can’t be revised away. But that one fact of greater equality suggests that the received wisdom of the 1970s as Britain’s nightmare decade is little more than a politically convenient libel which suits a narrative of redemption. We must never go back to the 1970s? Perhaps we should be lucky. There are worse places, as we may shortly see.

Posted by Michael Turner at 2:37 PM