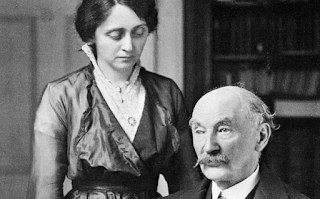 Much of Robert Graves's Goodbye to All That (1929) is set in the trenches of World War One France, the horrors of which are conveyed with a calm that owes more to injury (PTSD) than indifference. The final sixth deals with his post-war years, where, among other things, he and Nancy Nicholson visit Thomas Hardy and Florence (Dugdale) Hardy (pictured above).

Graves took heat for his portrayal of Hardy (and others), but without him, we would not have passages like this:

"One or twice [Hardy] had looked up a word in the dictionary for fear of being again accused of coining, and found it there right enough -- only to read on and discover that the soul authority quoted was himself in a half-forgotten novel!"

Posted by Michael Turner at 3:32 PM