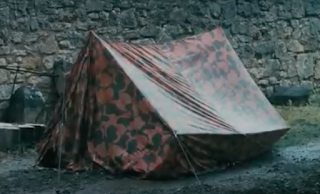 Agnes Varda's Sans toi ni loi (1985) translates as "with neither shelter nor law" in English but is called Vagabond for short. The story begins with the death of Mona, a drifter (as we once called them), followed by her ocean re-birth and what might be crudely described as the events leading up to her death.

The picture above is of Mona's tent, which she pitched the night before. A man walks by and asks

"Know where you are?"

And it's true -- Mona can't stay here, ever. Why? Because her death is forever followed by her re-birth. Is this immortality? No, it is her nature -- to prefer not to, as Melville once wrote (of Bartleby).

Posted by Michael Turner at 1:08 PM