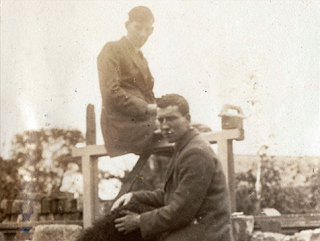 In the summer of 1916 Graves (above, bottom) receives a serious lung wound (it was originally reported that he was killed). His friend Siegfried Sassoon (above, top) is wounded in the lung as well. Both are returned to England.

"England looked strange to us returned soldiers. We could not understand the war-madness that ran wild everywhere, looking for a pseudo-military outlet. The civilians talked a foreign language; and it was a newspaper language. I found serious conversation with my parents all but impossible."

The 1929 publication of Goodbye to All That was the end of Graves and Sassoons' friendship. Sassoon felt the book was factually inaccurate; he was bothered also by Graves's 1918 marriage to Nancy Nicholson, and his 1926 affair with the American poet Laura Riding. 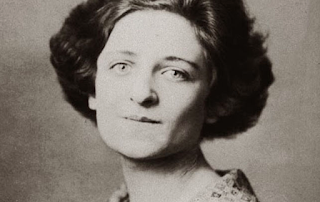 They come glowing to the gates of the city,
Armed with tenderness,
Resolute to parade
Beneath the windows of the cold women,
With their gifts warm on their shoulders.

The women sit frigidly smiling in their frames,
And their eyes are the eyes of Medusa.
Who but lovers,
Who but unslaked lovers may be starved so?

There is one bird left in the city of the cold women,
Forager of doorsteps,
Cosset of cold women.
It is sweet carrion they scatter to him.

Posted by Michael Turner at 2:55 PM