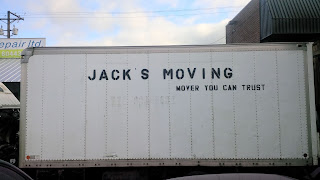 Jack's. A possessive, belonging to (Jack)? Or Jack's the contraction: Jack is (Moving)? We know it's the former, but we also know what it is to savour what it could be, pretend it's our reality. Even better if we don't like Jack. Jack is moving! Great! We never cared much for Jack; best he move on, get out of our sight. And the space Jack leaves behind? More room for the rest of us! Someone takes Jack's job, another his parking spot. Next summer someone asks where it was that Jack caught all that fish, and someone who doesn't get out much says, Ask Jack. No one says anything, not even a thank you, and that someone moves on, too.

Labels: Mover You Can Trust