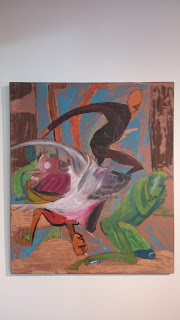 We all have our talents, our special gifts. In my neighbourhood, some of us are skilled in carpentry, plumbing or electronics, and are often called on to assess or assist in a situation. My skills have been requested on occasion, from proofing a letter to helping to interpret one. More recently I was asked to provide a professional opinion on a work of art purchased in Vancouver's downtown eastside. I was told it was an emergency.

The work is a 3'x4' mixed-media-on-paper painting mounted on board. Stylistically it pairs figurative illustration and symbolist expression. The colours are varied and vibrant. There is space between things; there is excitement and despair; there is treachery.

There are three distinct figures in this work (four or five if you consider that one of them is a shifter). The first is dressed in brown and is running. Not from something, but as a demonstration of its fitness, which it is working to enhance. The stylistic reference is Matisse. Its destination? Italian Futurism, which emphasized speed and violence.

The second figure is dressed in green and is on its knees. Words that emerge here include grief, loss and sadness. The stylistic reference is closer to home; namely, the 1980s mural work of Richard Tetrault.

The third figure is the most complicated, for it is many things, all of them caught in a split-second transition. On a cartoon dog's legs, a horned beast faces one way, a surf-busting shark faces the other -- in this case, the back of the green figure. Stylistically, this transitional figure is a meeting of Hanna-Barbera, Francis Bacon and David Hockney.

"What do you think it means?" asks its owner, emphasizing the you.

"Any number of things," I tell him. "But whatever it is, it is as we say an emergency."

Posted by Michael Turner at 9:11 AM