"They had only the habit of authority ..." 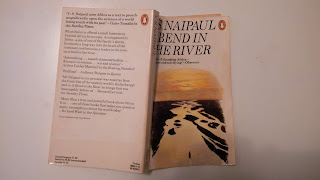 Below is a passage that comes early in one of his better known books, A Bend in the River (1979), where the author attempts yet another reading of the trampled "new world" landscapes in search of what scholar John Cooke calls a "native historical tradition."

"Once, great explorers and warriors, the Arabs had ruled. They had pushed far into the interior [of Africa, from the east coast] and had built towns and planted orchards in the forest. Then their power had been broken by Europe. Their towns and orchards disappeared, swallowed up in bush. They ceased to be driven on by their position in the world, and their energy was lost; they forgot who they were and where they had come from. They knew only that they were Muslims; and in the Muslim way they needed wives and more wives. But they were cut off from their roots in Arabia and could only find their wives among the African women who had once been their slaves. Soon, therefore, the Arabs, or the people who called themselves Arabs, had become indistinguishable from Africans. They barely had an idea of their original civilization. They had the Koran and its laws; they stuck to certain fashions in dress, wore a certain kind of cap, had a special cut of beard; and that was all. They had little idea of what their ancestors had done in Africa. They had only the habit of authority, without the energy or the education to back up that authority. The authority of the Arabs -- which was real enough when I was a boy -- was only a matter of custom. It could be blown away at any time. The world is what it is." (pp. 20-21)

Posted by Michael Turner at 8:11 AM