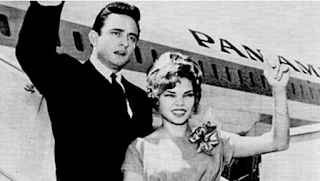 Liberto is of Italian-American heritage, but because some thought she looked Black, the Cashes were persecuted, both personally (death treats) and professionally (cancelled shows).

Here is Vivian Liberto, as played by Ginnifer Goodwin, in the Cash biopic Walk the Line (2005):

Here is what Liberto and Cash's daughter Kathy had to say about how her mom was depicted in that film.

Mistaking someone of one racialized identity for another is nothing new. I know of two instances. The first was told to me by a childhood friend, the son of a Canadian-born Italian (Calabrian) father and a Canadian-born mother of Scottish descent. The two were travelling in the American South in the mid-1960s. They boarded a city bus, and my friend's father was told to move to the back of it.

Another story was told to me by a Calgary writer of Italian (Sicilian) descent who was dating a woman whose parents came from Northern Italy (Milan). After a couple months, his then-girlfriend invited him to meet her parents at her family home in Calgary's Mayfair neighbourhood. When they arrived at the house, the girl's mother opened the door, took one look at the writer and said to her daughter, "Get that n*gger off my steps," before slamming the door in their faces.

Posted by Michael Turner at 8:40 AM