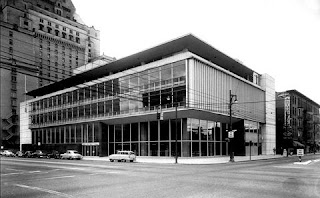 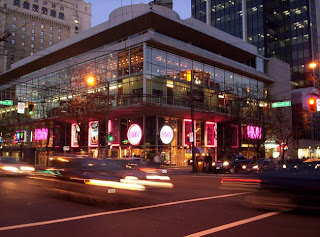 One of the many vacant storefronts I saw during my most recent walk along Robson Street is the ground floor/basement of the former Vancouver Public Library main branch, at the northeast corner of Burrard and Robson.

Designed by Semmens and Simpson, the VPL opened in 1957 and remained a library until 1996, when it was redesigned for retail and commercial use -- CTV and the Globe and Mail upstairs; a Virgin Megastore and, later, an HMV below that.

But now that lower space is empty. Who its new tenant might be will depend on who can pay its rent. That this space has sat empty for the past six months tells us that the rent is higher than a tenant's ability to make a profit. The same could be said of the other high-traffic corner spaces along Robson west of Granville.

At dinner last night someone suggested this space would make a great art gallery. Some suggested an annex of the VAG, while others suggested a new home for the Contemporary Art Gallery, whose current Yaletown location (below a condo tower) has never sat well with me -- a design that looks as if it was built less for an art gallery than a former art gallery, one that could easily be converted into a retail shop.

Does the City of Vancouver still own the former VPL site, or was it sold to someone rich enough to keep its lease rate high enough that no one can afford to rent it?
Posted by Michael Turner at 2:13 PM