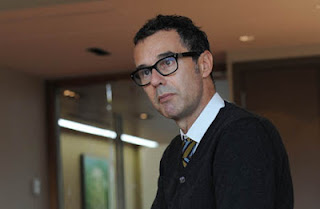 What is the role of the art critic? Is it to look at art as an autonomous enterprise, on its terms, and report on it, point out where it succeeds and fails? Could that be amended to include the larger social context in which that art occurs, such as where and when, and the times we are living in today?

Yesterday I received David Baxter and Bob Rennie's 22 page pdf: "VAGS - A Community Centered (sic) Vision of the Vancouver Art Gallery System". This document was not sent to me by its authors but by those who received it directly from them. Those who also did not receive this document directly include the director of the Vancouver Art Gallery, who, according to the authors (their mail-out list was unsuppressed), is not part of their "Community". Not a good start.

Here is their email preamble to the pdf:

To all of you on this email...David and I are not just looking for a solution to the VAG here .... we want to bring to the surface and create a real discussion around puplic (sic) and private support of arts and culture and philanthropy in this new economy.

The attached document does come with the non-negotiable that Vancouver is not a Head Office city and that the limited resources for philanthropy and tax dollars cannot be towards any single arts and cultural institution at the expense of all others....David and I just took a practical approach to a 15 year water cooler discussion that we thought deserved a broader discussion amongst some of the voices on this email...

WHO SHOULD DECIDE THE COMMON GOOD...was the title of a panel discussion at the Trudeau Foundation that I participated in last month...and if the question is asked of Arts & Culture ...the answer is....easy....all of you on this email...should decide the common good along with everyone you care to share this document with...

Seriously thank you for allowing David and I to have a voice here.

I suppose in fairness I should include the authors' "Vision" in this post. (Indeed, I would have done so if their preamble was not in need of unpacking.) Suffice it to say, what is said in this "Vision" includes an idea Rennie floated in the Globe and Mail last summer, about multiple VAG galleries, or what is now, like his own company, a "System."

Is the VAG in need of a "solution"? If so, it might help to know what the problem is? And if there is a problem -- or problems -- why does Baxter and Rennie's report not "bring [that] to the surface" as well?

Perhaps in their attempt to be positive, appear constructive, present a "Vision", the authors, like many of us, have eschewed critique altogether, preferring to dismiss it as negative, counter-productive, "mean-people"? But is a deeper understanding of the structural problems facing public institutions today not a bigger asset to helping these institutions achieve what we, the public, expect of them than beginning at the top -- a problem the VAG encountered after trying to excite public interest in their proposed move to a new building? Is it not part of the "real discussion"?  I am all for private and public partnerships, regardless of who instigates them, but I cannot help but be suspicious when the authors of this "Vision" cannot even spell the word "public" correctly.

To say that Vancouver is not a "Head Office City" does not take into account its many self-employed residents, from independent writers such as myself to janitors who, after their unions have been busted by private companies, work on contract. Because we are self-employed, are we not our own "Head Offices"? Ah, but if by "Head Offices" the authors mean corporate "Head Offices", why did they not say so in the first place?

When Barack Obama was first elected President of the United States, the bulk of his campaign contributions came from individual donations under twenty dollars. If the VAG received twenty dollars from every self-employed person in Vancouver, the City would surely take notice -- not for the money raised but for the votes those dollars represent. That the authors of this "Vision" have ignored these many individual "Head Offices" for a few corporate ones tells us their first priority is a corporate VAG, not a public one.

"WHO SHOULD DECIDE THE COMMON GOOD," they shouted. Well, for starters, it might begin with those who speak in lower case letters.
Posted by Michael Turner at 1:50 AM