Protect Me from What You Want Them to Say 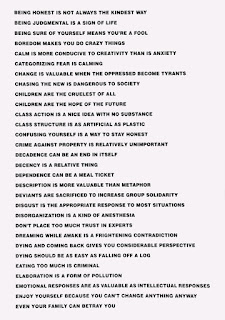 A pioneer in public text work is U.S. artist Jenny Holzer (b.1950). In 1977, Holzer began pasting her Truisms (anonymous legal-sized broadsheets drawn from her Whitney Independent Study Program reading lists) onto walls and utility poles around Manhattan. Five years later, her tweet-sized texts were appearing on electronic surfaces, such as the Spectacolor billboard at Times Square. 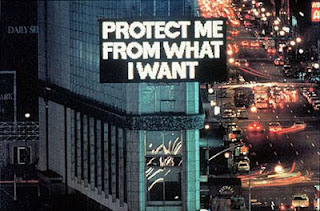 Another artist who has made something of text in public space is U.K.-based Gillian Wearing (b.1963), whose emergence coincided with Holzer's often garish attempts to modify her texts for museum display.

While Wearing works in a number of different mediums (video, photography, performance), she first came to our attention with Signs that Say What You Want Them to Say and Not Signs that Say What Someone Else Wants You to Say (1992-1993), where she approached people in public space and asked them to write down the first thing that came to mind. 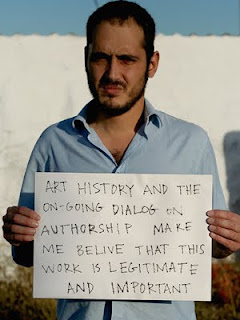 Posted by Michael Turner at 9:56 AM