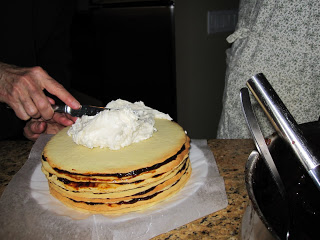 Judy Radul is my co-vivant of nineteen years. Her mother's brother, David Lucas, and his co-vivant, Margret Samson, have been going steady for at least twice that long. Margret's brother's son is the singer-songwriter John K. Samson, making John my second-cousin twice removed (I think).

Five years ago I flew to Winnipeg for Christmas, where I met Judy and David, who were en route after two weeks vacation in Buenos Aires. Judy and I stayed at the Fort Garry Hotel, and the following night we had Christmas dinner with Margret's brother's family, which included John and his wife, the singer-songwriter Christine Fellows.

The Samsons are an important Winnipeg family. Margaret's father owned and operated a printing press that served the Icelandic community and their fellow workers of the world, most notably through the Icelandic Quarterly, which amalgamated with another Icelandic paper in 1959, owned by Margret's father's sister's husband. John has carried on this tradition with a book publishing company, Arbeiter Ring.

A recurring topic at the Samson dinner was Iceland's gift to cuisine -- the vinarterta. Margaret is a passionate historian, advocate and maker of this prune- and cardamom-infused dessert, and John gave me every indication that he too is a fan. "Have you ever written a song about it?" I asked him, to which he replied, "Everything I write is in some way related to the vinarterta."
Posted by Michael Turner at 12:10 AM