Having Said it with Flowers 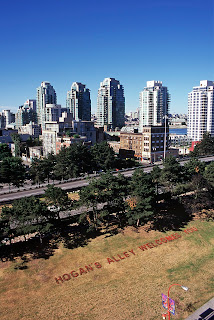 In 2007 artist Lauren Marsden, along with a team of volunteers, performed an unauthorized planting of red impatiens on the tomb-like mound at the east end of the Dunsmuir Viaduct (between Union and Prior Streets, just east of Main). I say tomb-like because underneath this mound once lay the entrance to Hogan's Alley, Vancouver's first African-American neighbourhood.

Both the Dunsmuir and Georgia Viaducts are the closest Vancouver came to having an inner-city freeway, the initial stage of a massive public/private development known as Project 200. The abandonment of Project 200 came about in the late-1960s, after a citizens' group formed to block the freeway proposal's second stage and yet another potential erasure: Chinatown. The core of this ad hoc group went on to form Vancouver's COPE party.

As anyone who has visited a graveyard knows, it is customary to leave behind flowers -- a fresh sign of life to show those passed that they remain with us today. Marsden has done just that with her uncut shade-loving impatiens, whose plantation scheme follows words solicited from the Hogan's Alley Memorial Project: HOGAN'S ALLEY WELCOMES YOU.
Posted by Michael Turner at 7:42 AM