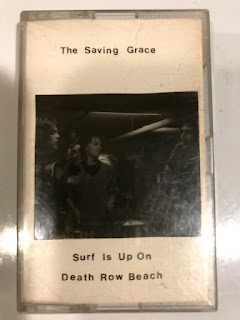 I finally got around to listening to the tapes Ingrid dropped off the last time we visited. The cassette above is a nine song album I made in Victoria with Bruce Cobanli (bass) and Douglas Turner (percussion, engineering) in the spring of 1985, when the three of us were in our early 20s and listening to a lot Woody Guthrie, Kinks, Jonathan Richmond and Meat Puppets. In addition to that, another three songs in a similar spirit I recorded (with Bruce) in Vancouver in the summer of 1986 on that same 4-track player I purchased from Patrick Pothier with money received from an ICBC settlement (we considered making ICBC the album's Executive Producer).

Difficult to describe how I felt listening to those songs thirty-seven years later. Difficult because I feel it necessary to get the order right. For example, if I were to begin with mood, was it the quality of the sound (ghostly) that makes it so, or the lyrics (biblical)? Surely a combination of the two, and more, because nothing is ever singular anymore but an assemblage of things, a relationship. I hear this most in the blend of voices, the way Bruce's voice joins mine on the harmonies. Not so much meeting it, but knowing it. Back then I would have felt uncomfortable being known in that way, or expressed in that way; today, less so.

My mind is a broken clock/ Sometimes it tics, mostly it tocs a lot

We recorded Surf Is Up On Death Row Beach at my basement apartment in a once-grand Edwardian mansion at 221 Michigan Street in Victoria's James Bay neighbourhood, a house that was, until a couple years ago, still standing. I recorded the lead vocal and guitar on separate tracks. On the following day, when I had classes and Bruce and Doug didn't, Bruce recorded his bass and vocal harmony on one track and Doug recorded his drums on the remaining track. Two weeks later we had our fifty copies, with photography and layout by Doug. I took them around to local record shops, and never thought to check to see how many of them were sold or stolen.

Next week I will be taking these tapes in for digitization, editing and mastering. From there I'm not sure what I'll do, for the forms these recordings take are, more often than not, no longer to be held or handled.

Doug wrote to say that the address is 216 Michigan St., and the old house (still painted taupe) remains! 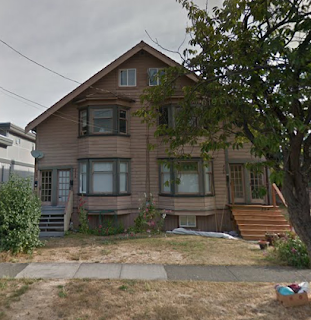