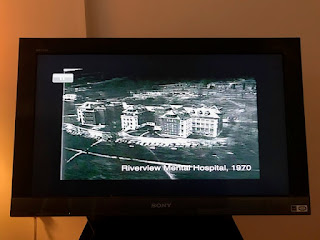 Last night I watched The Inmates Are Running the Asylum: Stories from MPA (2013), a 36 minute documentary on Vancouver's Mental Patients Association and its attempt to humanize mental illness by collapsing the systems that exacerbate it. Providing a horizontal governance structure was one such strategy; another was speaking its name -- an organization run by and for patients with mental health issues.

The documentary managed to pack a lot into its 36 minutes, from the haphazard closing down of Riverview Hospital (until the late-1960s, Riverview had over five thousand residents, where in the early 1970s its population had dropped by 90%) through the opening of its historic drop-in centre at the corner of 2146 Yew (five blocks east of yesterday's picture).

Where did everyone go? Well, the same place they went when Riverview underwent its next "deinstitutionalization" in the 1980s, when residents were given a new coat, fifty dollars and the address of one of Vancouver's three emergency services shelters -- and that was Vancouver's downtown eastside. Prior to that, the downtown eastside was more popularly known for seasonal resource workers and those addicted to drugs and alchohol.

The picture up top is CBC footage; the picture below I believe was taken by Lanny Beckman, who is prominent in this documentary. 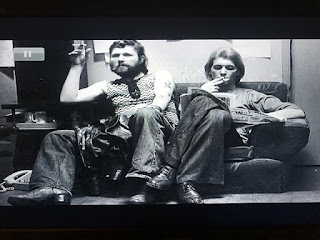 Posted by Michael Turner at 7:25 AM