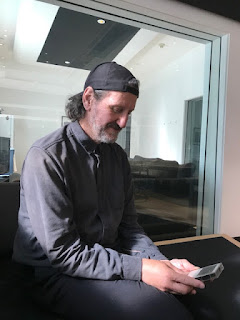 Yesterday's visit to the Warehouse in Gastown produced clean and crisp digital transfers, edits and masterings of my early Saving Grace songs (1985-86) and the Hard Rock Miners CFMI-produced simulcast of our Breakers concert at Point Roberts, Washington in 1992. Hayden Watson did the engineering, while Jamey Koch, who I have known since he was sixteen, provided musical supervision. That's Jamey up top, texting me to say, Stop taking my picture.

Jamey is a great musician, writer, engineer and record producer who has seen and done a lot in his fifty-plus years as a human being. A more recent project is an about-to-be-released collaboration between Bob Rock and Gord Downie that blew my mind insofar as it is nowhere near what I expected after he introduced the project to me.

I've never been a big Tragically Hip fan (if I have a favourite Hip song, it's "What Blue"), but I admire the band and how its members wove a blanket of itself, the kind you pull close if something isn't right in your world. For Bob and Gord's collaboration, it began when Gord asked Bob what he was writing (Bob was producing the Hip's 2014 World Container album at the time). A couple weeks later Bob sent Gord some music, and a couple weeks after that Gord returned the files with lyrics and vocals. The result is an album that sounds like what happens after a tour bus breaks down on the Texas panhandle and the band's Bowie-esque singer (Young American's era) shows up at the local roadhouse's karaoke night.

Speaking of breakdown's, here's Jamey in the Warehouse's courtyard, revealing the car that studio owner Bryan Adams stood on top of for a recent video. Those in the know will recognize the car as the make and model that launched consumer advocate and environmentalist Ralph Nader, whose first book, Unsafe At Any Speed (1965), was named after the designation given to the Corvair, which had a tendency to flip over over on highways. 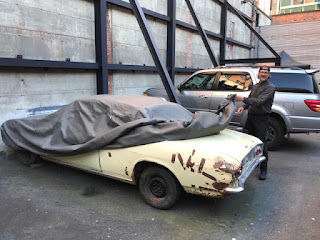 Posted by Michael Turner at 8:58 AM