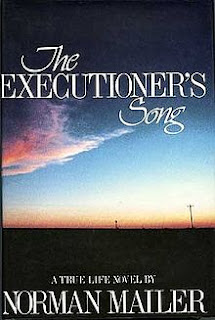 Despite continuing with the Wild Rose Cleanse and its lunch bucket of herbal laxatives, I have yet to finish Robson's essay (see yesterday's post), returning instead to the writings of Vidal and Mailer, of which I have one book each.

Robson tells us that Vidal's strong suit is his non-fiction, but the book I have is his best-known: the novel Myra Breckinridge (1968). As for Mailer, who is known for his fiction, I believe his most enduring book will be the one in my library, his heavily researched "true life novel" The Executioner's Song (1979).

After re-reading the first twenty pages of Myra, I gave up and took the book not to the shelf where it sat all these years but to the out-box I keep in my laundry room. Which is a shame (at least symbolically) because Myra is, according to the glbtq.com encyclopedia, "the first instance of a novel in which the main character undergoes a clinical sex change," and the "sex change" is big news now that, as the coffee roaster down the street keeps telling me, "Trans is the new Gay." (But then, sincerity is the new satire, so who [under 45] would not look down on a book that treats its subject as such, particularly a book as stiffly written as Myra?)

As for The Executioner's Song, and in keeping with the ongoing thematic re-arrangement of my library, I have moved it from the "M"s to its new home -- a neighbourhood that includes Truman Capote's In Cold Blood (1966) and Lynn Crosbie's Paul's Case (1997).
Posted by Michael Turner at 10:15 AM