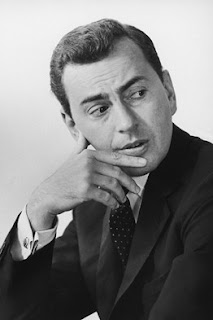 Sloshing through the books and magazines that litter my home, the October 26, 2015 New Yorker still in the bathroom. Twice now I have read Nicholas Schmidle's feature on a young Syrian refugee -- then suddenly, as if the magazine had a secret compartment, Leo Robson's expanded review of Jay Parini's Empire of Self: A Life of Gore Vidal (2015), with its playful title "Delusions of Candour", but an even better subtitle, "How will we remember Gore Vidal?"

What I remember of Gore Vidal begins with my introduction to him in People magazine in the mid-1970s. The accompanying black-and-white picture showed Vidal and Norman Mailer dressed in 1950s style suits glaring at each other from opposite sides of Kitty Carlisle's couch. The article described how, after years of baiting each other, the two came to blows, with Vidal calling Mailer a "dirty little Jew" and Mailer responding with something only slightly less injurious. From then on I made it my business to know who these men were and what they meant to America.

Here is a paragraph from Robson's article:

Yet it would be hard to imagine a less intimate biography. Parini loved spending time with the wordly, woundless Vidal, and he seemed eager to perpetuate Vidal's myths about himself. In a letter from the late forties, Vidal wrote that psychoanalysis is "quite a frightening experience," and that "it's not a pleasant thing to see oneself." But when Vidal tells Parini that his experience of therapy failed because "I have no unconscious," the biographer doesn't pause to comment.
Posted by Michael Turner at 2:49 PM