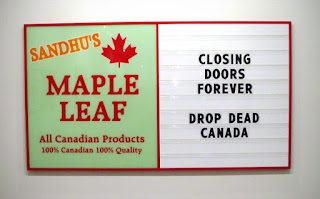 The most recent issue of Canadian Art magazine features an article by artist Ken Lum, in which he talks about the difference between Canada and the United States. Lum left Vancouver five years ago to take a teaching position at the University of Pennsylvania.

My thinking about art and life comes largely out of growing up in a quiet but skittish Vancouver, which has since transmogrified into something I barely recognize as my own. An immense influx of capital has transformed the city into a spectacle that engenders in its visitors feelings akin to the discovery of the secret of poetry, unaware that it is misrecognition of depth for surfaces. Vancouver has become adorned in what Walter Benjamin called dream kitsch, “the last mask of the banal, the one with which we adorn ourselves, in dream and conversation, so as to take in the energies of an outlived world of things.” It is not just things that become outlived but the people for whom the city is no longer a possibility.
Posted by Michael Turner at 12:21 PM