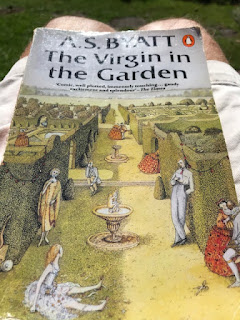 Novelist A.S. Byatt introduces secondary characters in a way that appears to take delight in the reader's tendency to want to know sooner than later the degree to which this new character is capable of making the main character's life a living hell. This she does almost sadistically, with the slow, hand-over-hand release of Alexander's boss at Blesford Ride School, one Bill Potter, to whom Alexander is about to inform ("not without misgiving') that his play has been acquired and is entering production.

"Bill was in many ways a reincarnation of the original spirit of Blesford Ride. He proclaimed the weighty agnostic morals of Sidgwick, George Eliot and the first Matthew Crowe. He worked ferociously at his own version of Ruskin's and Morris's popular culture, with a dour respect for real workers and their lives and interests more akin to Tawney's work in the Potteries. The vigour behind what local cultural life existed in 1953 was in large part his. He gave University Extension lectures to which people travelled miles in all weathers, in vans and country buses, from moorland villages and seaside resorts, wool towns and steelworks. He ran a Settlement in Blesford Church Hall, and was a power behind the continuation of the Literary and Philosophical Society in Calverley. He could make people do things, themselves, that were durable and worth doing." (21)

Posted by Michael Turner at 8:19 AM