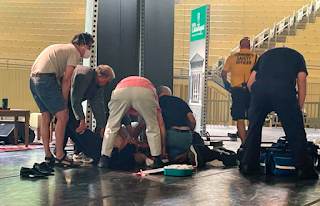 I wouldn't say this is one of Jeff Wall's "better" pictures, mostly because it doesn't venture far enough from the one Joshua Goodman made onsite and in the moment. But as "history" pictures go, it is effective. I particularly like the lighting, or the lack of it. Also, the diagonal slope (see Joe Rosenthal's iconic Iwo Jima photo) created by the four men assisting the fallen author, one of whom is holding up his legs (to keep the blood down). That and the grieving figure to the far right of us, the tension between him and the edge of the picture. As for the title, Ian Wallace made two works called An Attack on Literature in 1975. Is Wall's Attack on Literature in any way related to the fatwa the Ayatollah Khomeini issued in 1989, when he referred to the author's novel, The Satanic Verses, as "blasphemous"?